Earth moving machinery has a particularly destructive impact on archaeological sites. It is linked to a large number of other impacts: flattening the land to aid agriculture or irrigation schemes; demolishing sites to enable easier looting; terracing to create platforms for agriculture; digging out foundations for construction projects; even building cemeteries. The increasingly easy access to such machinery has allowed the effects of modern living to encompass archaeological sites in ways that are simply not possible one hundred years ago, epitomised by the bulldozer. At the same time, methods of recognising archaeological sites have improved, placing an increasing strain on the capacity of heritage organisations. Two sites in Jordan that have been damaged by bulldozing are shown below: Ma’an el-Hammam (Figures 1–3)  and Qasr Aseikhim (Figures 4–6).

Figure 1: This is the site of Ma’an el-Hammam, in Jordan, shown on an aerial photograph taken by Sir M. Aurel Stein and now held at the British Academy. It was a Qasr/Caravanserai (rectilinear structure arranged around a courtyard) with associated reservoir and surrounded by what may be old field walls. 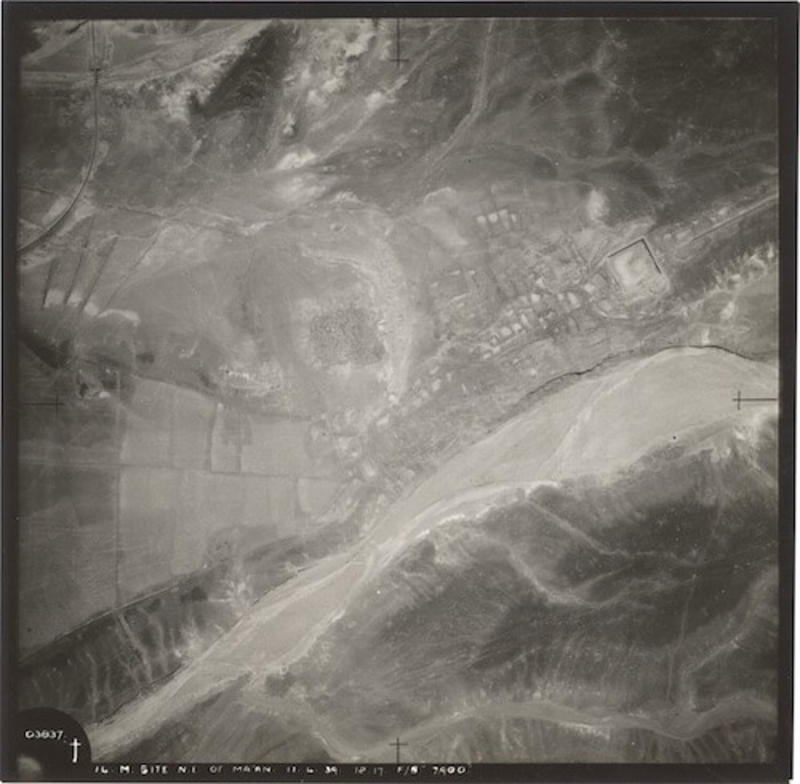 Figure 2: As can be seen on this aerial photograph taken in 2009 (APAAME_20000914_RHB-0080 Ma’an el-Hammam), bulldozing and the creation of olive groves have destroyed almost everything but the reservoir (marked in red). 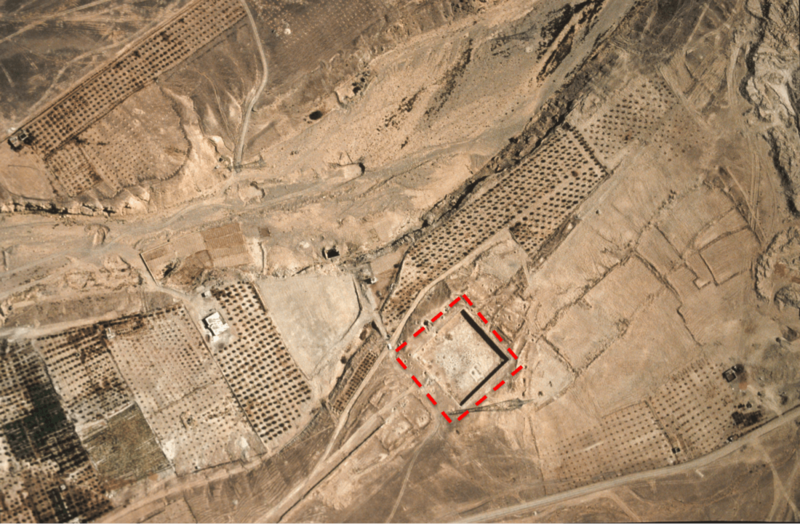 Figure 3: The full extent of the damage at Ma’an el-Hammam can be seen on this February 2015 DigitalGlobe satellite image from Google Earth. 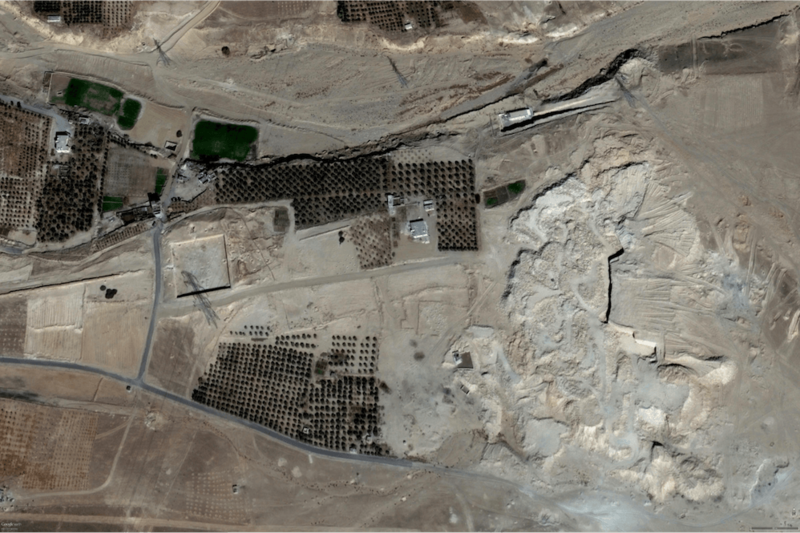 The sequence of aerial photographs below (Figures 4–6) shows the site of Qasr Aseikhim in Jordan. Figure 4 was taken in May 2005 (APAAME_20050518_RHB-0101 Qasr Aseikhim) and shows the site intact. Figure 5 was taken in October 2005 (APAAME_20051003_RHB-0175 Qasr Aseikhim), and shows the damage done by a bulldozer to the walls and the site, indicated with blue arrows. A looting hole is marked with a blue circle. Figure 6 was taken in 2008 (APAAME_20080909_DLK-0201 Qasr el-Aseikhim) and details the damage to the citadel. In addition, many of the stones in the citadel walls have collapsed from natural erosion; the people visible in the image are probably illegal looters. 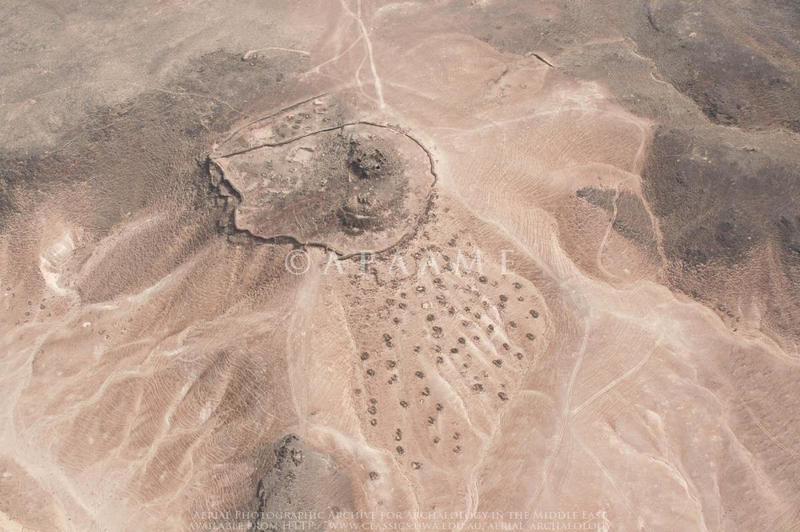 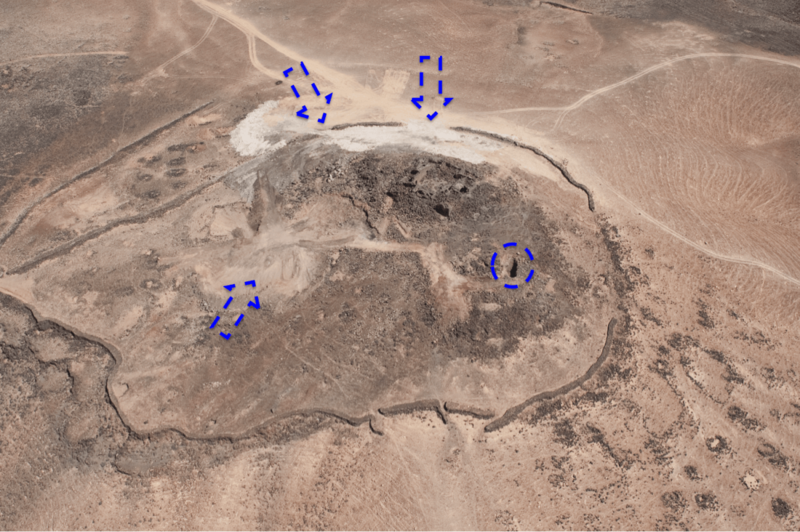 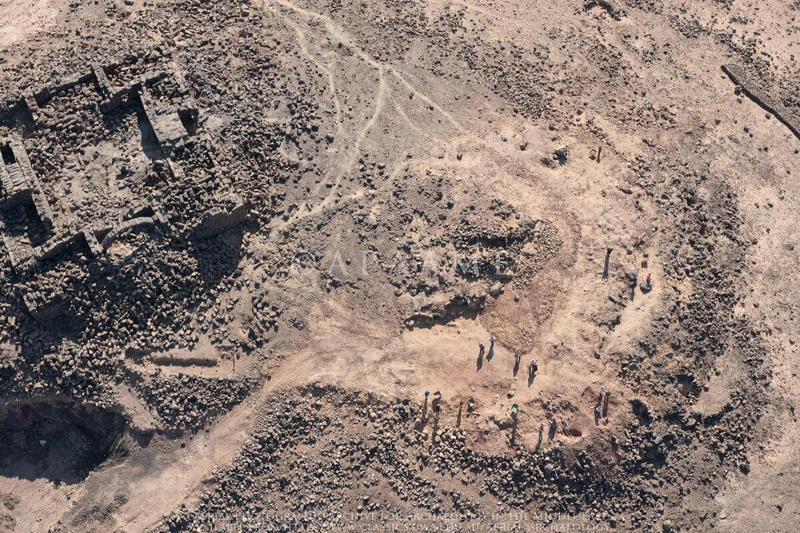