The Endangered Archaeology of the Middle East and North Africa (EAMENA) project was set up in 2015 in recognition of threats to cultural heritage in the region. The project is led by the University of Oxford in partnership with the Universities of Leicester and Durham; it also works very closely with the Maritime Endangered Archaeology project (MarEA), based in Southampton and Ulster Universities. Both projects are supported by Arcadia, a charitable fund of Lisbet Rausing and Peter Baldwin. The projects aim to document archaeological sites, and publish those records on EAMENA’s Open Access online database. The projects are not restricted to documenting sites that are directly under threat. Rather, they document all sites within the areas in which they operate. This is to help local heritage authorities monitor potential threats, assess the priority of individual sites and decide where to focus resources for preservation and protection. The projects also work closely with many government heritage protection bodies in the MENA region, training their staff in using the database thanks to additional support from the British Council’s Cultural Protection Fund (CPF).

Many of the sites in the database are previously unrecorded, having been discovered using remote sensing techniques, especially satellite imagery, which provides the primary tool for new survey work conducted by the EAMENA and MarEA projects. The database also includes digital copies of existing site records that have been published elsewhere. The combined information makes the EAMENA database a significant new tool for cultural heritage management and archaeological research. Recently, the EAMENA database underwent a major upgrade to operate on the latest version of the Arches platform. Arches is the latest in open-source cultural heritage documentation and storage software, which began as a collaboration between the Getty Conservation Institute and the World Monuments Fund. The new Arches 5 combines flexible, hierarchical data structuring with intra-linked resources and semantic interoperability via integration with a Conceptual Reference Model, allowing the EAMENA database to better capture cultural, environmental, geospatial, and informational data and metadata.

With EAMENA- and MarEA-led core-Arches developments in place for Arches version 5.2, such as multilinguality, advanced map widgets, connectivity with GIS systems, data sustainability, bulk uploading of site information, and simplified data entry forms, researchers will be able to easily document, explore, and analyse datasets detailing cultural heritage sites and the threats to them. This advancement in digital documentation capability supports holistic, interoperable approaches to archaeological recording and interpretation as well as methodologies for long-term data maintenance and preservation of cultural heritage across the Middle East and North Africa. 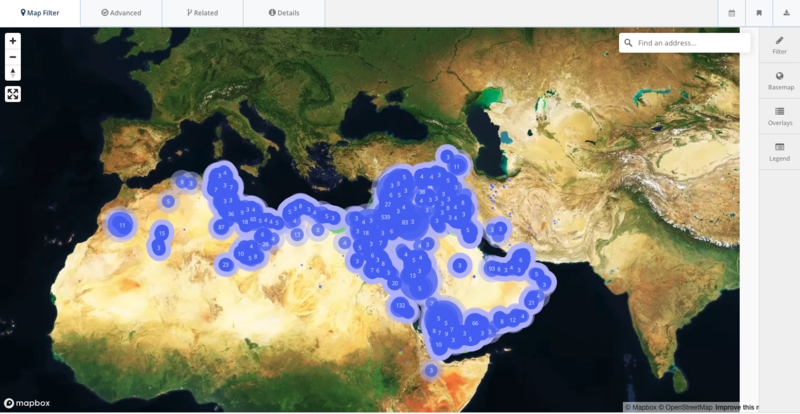