Karak Plateau: Ground survey as a supplement to remote sensing

As is very clear from the EAMENA project, there is a lot you can find out from satellite imagery. However, there are some things that you simply cannot see. On imagery of the Jordanian Eastern Desert, for example, remains of Neolithic and other prehistoric structures are well visible. But further to the (wetter) west, the period is underrepresented in the EAMENA database, because the remains are often hidden under later occupation or sediment that has washed down, or are only represented by a chipped stone and/or ceramics scatter (for more information on this topic, the 2015 paper by Ted Banning is an excellent source, you can find the full reference below this blog). 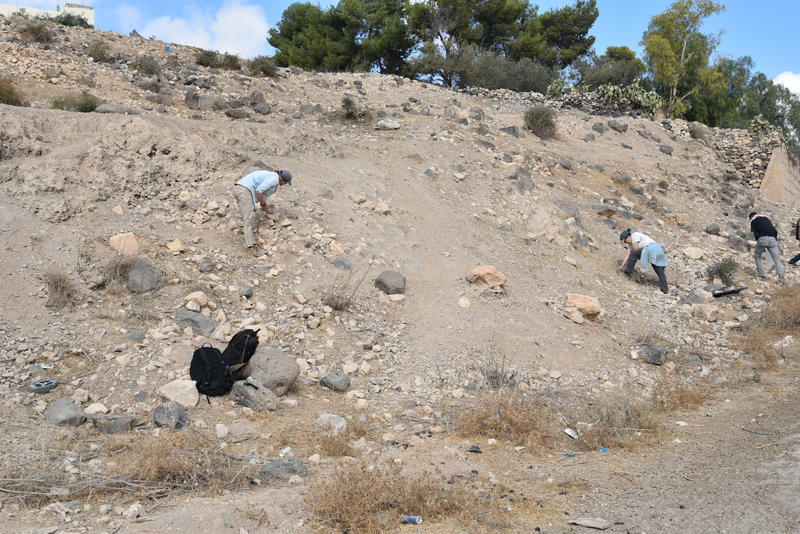 An example of a site where Neolithic remains are covered under metres of later periods (Early Bronze Age-modern) at the tell site of Imra’, Karak Plateau, Jordan.

This is why I set up the EAMENA-affiliated project “Climate, environment, and early farming societies: Late Neolithic settlement patterns on the Karak Plateau, Jordan” (or in short, the Karak Neolithic Survey), with co-investigators Bill Finlayson and Zeidan Kafafi. We focus specifically on the Late Neolithic, although when out in the field we gather all evidence irrespective of period. The reason for this focus is that the Late Neolithic is particularly underrepresented in the record, even though it is of major interest: It is the period during which 4000-year-long neolithization processes culminated, resulting in, for the first time, a landscape of many small, mixed farming communities. At the same time mobile pastoralism developed as a separate lifestyle, with the distinction between the ‘desert and the sown’ emerging that persisted for millennia afterwards in the Middle East. It is also a period which saw profound climatic change, like the so-called 8.2 ka (because it happened ca 8200 years ago) cold and arid ‘event’. Drier conditions started within less than a decade and lasted for around 250 years. Despite these drier conditions, early farming communities appear to have been relatively resilient – the question is how they managed to do this. 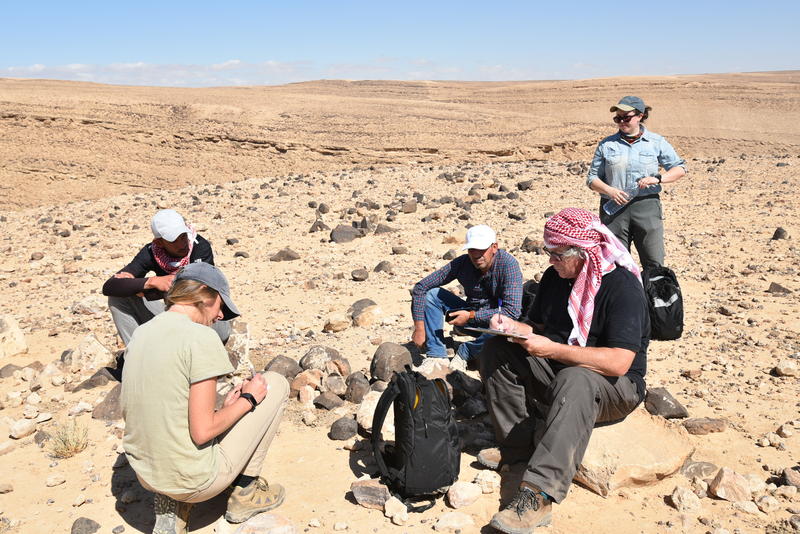 Documenting archaeology in the field. An important part of ground survey is not only the picking up of material, but especially also documenting what is found, which is done here on paper forms and finds labels (while the rest of the team are having a well-deserved rest and drink of water).

We chose the Karak Plateau in Jordan as our survey area because it lies on the current boundary of rain-fed farming land (where irrigation is not heeded) and drier steppe areas which mostly see pastoralism with opportunistic farming (if enough rain happens to fall). With climatic change, the boundary would have moved further west (increasing aridity) or east (increasing wetness), and we are interested to see how this is reflected in the settlement patterns.

So how did we go about finding these relatively invisible sites? We were inspired by an approach successfully used in the northwest of Jordan, where a team from the University of Toronto specifically targets areas likely to contain prehistoric sites, using Bayesian modelling to assign higher and lower probabilities (Hitchings et al. 2016). Criteria are for example the presence of water and naturally wet areas, which is key especially in a period before artificial irrigation was used. We started with a literature study to integrate information already known about the area (the Limes Arabicus Survey by Tom Parker and the Archaeological Survey of the Kerak Plateau by Miller especially contain much useful information, these surveys have been entered in the EAMENA database). Subsequently we undertook a remote sensing study to identify visible archaeological remains – of any period – as well as areas that appear to be close to permanent water sources and naturally wetter. There are some clues in the imagery, such as the presence of ‘old’ villages from before mechanical water pumping was available, and wadi junctions, visibly greener areas, etc. This also gave us information on areas that are not accessible. For example, even though there may well be archaeological remains under a modern building, if we cannot get to it, we cannot investigate it, so such areas were out. 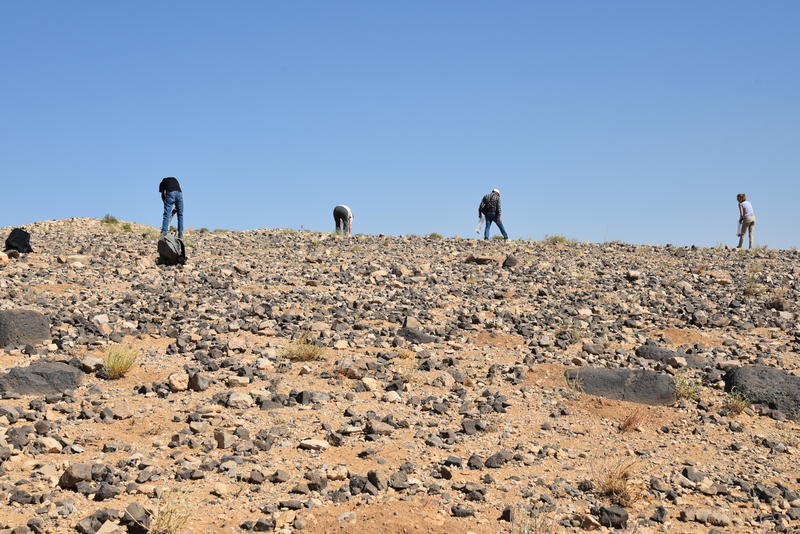 Once areas with seemingly higher chances of finding visible remains of Late Neolithic sites were identified, we set off to do two weeks of ground survey. This was kindly funded by the University of Oxford’s John Fell Fund, with additional funding from EAMENA and the Unversity of Kiel Excellence Cluster ROOTS-DietaryROOTS subcluster. With six people we documented 82 survey units. In each of the units we documented all archaeology and collected surface material, which was subsequently studied by specialists. For the ceramic specialists it was a bit disappointing that most of the finds consisted of chipped stone! But we did also find ceramics, especially in the northwest of the study area, which is within the ‘farming’ zone. For this pilot season, we made certain to include not only areas with a high probability of containing Neolithic sites, but also ones with medium or low probabilities, to check if the method works. Indeed this seems to be the case! Areas with high probabilities did not necessarily yield Neolithic material, but very often at least an archaeological site was present, while areas with low probabilities had no to little (visible) material. 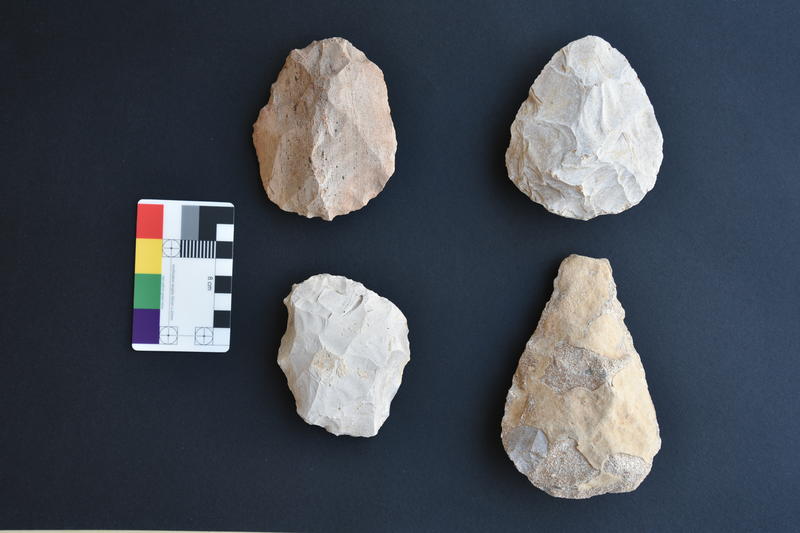 We didn’t just find Neolithic material, but almost all cultural periods from the Palaeolithic to the 20th century were represented. Interestingly, a considerable number of the ‘sites’ were scatters that were not visible on the satellite imagery, so the ground survey is adding extra sites to the EAMENA record. In other cases, suspected archaeological remains based on satellite imagery could be confirmed, and some extra information such as cultural period could be added. This was for example the case for a landscape with agricultural terraces and (probably habitation) structures in the Wadi Ghweir, with Late Bronze Age/Iron Age as well as Ayyubid/Mamluk ceramics. 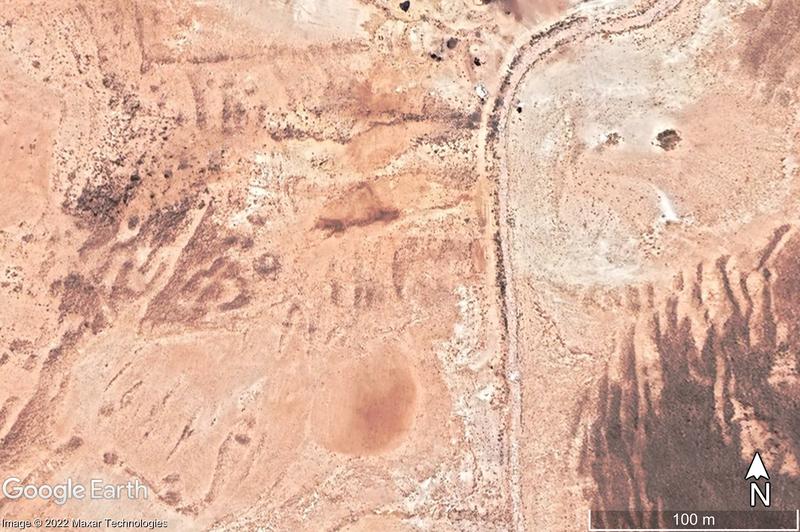 Google Earth imagery (Maxar Technologies, 22 June 2021) of terraces and at least one structure in the Wadi Ghweir, confirmed on the ground to be archaeological (or at least associated with archaeological material).

A really interesting landscape was present near the modern village of Hmud. As this village lies (just) within the farming zone, on a junction of wadis, and it was already known that there has been occupation here since the Classical period, we had high hopes of finding a Neolithic site. Initially the results were disappointing in that sense, although we were able to set back the data of Hmud to at least the Late and probably Early Bronze Age. However, we did find evidence of earlier occupation on the other side of the wadi junction, suggesting that at some point the focus of settlement had simply moved a short distance. 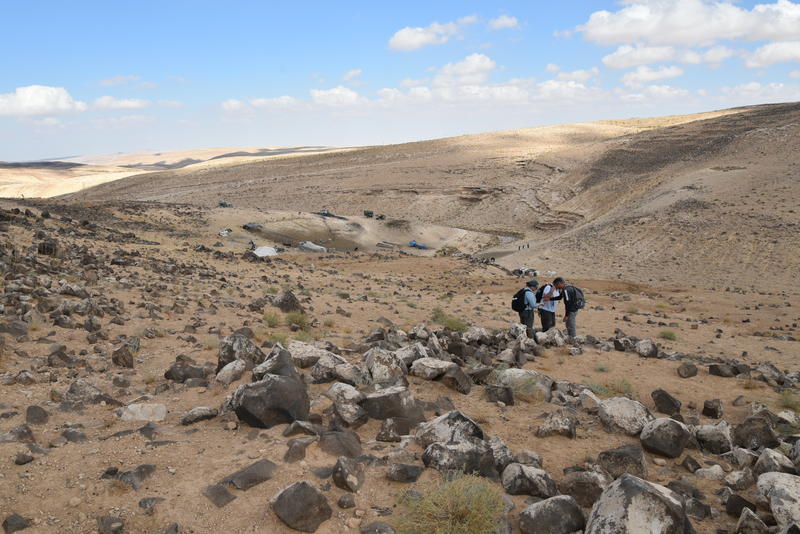 The landscape of the above Google Earth image on the ground, a probably Ayyubid/Mamluk terraced landscape with possibly LBA/IA structure in the foreground.

With the information of these survey units in combination with information about Late Neolithic sites in similar environments elsewhere in Jordan, we are now able to set up a Bayesian model and put this to the test in future field seasons.

With many thanks to the field team and specialists (Bill Finlayson, Zeidan Kafafi, Elizabeth Gibbon, Laith Alshboul, Lily Graham-Stewart, Mohammad Tarawneh) and the Department of Antiquities in Jordan! 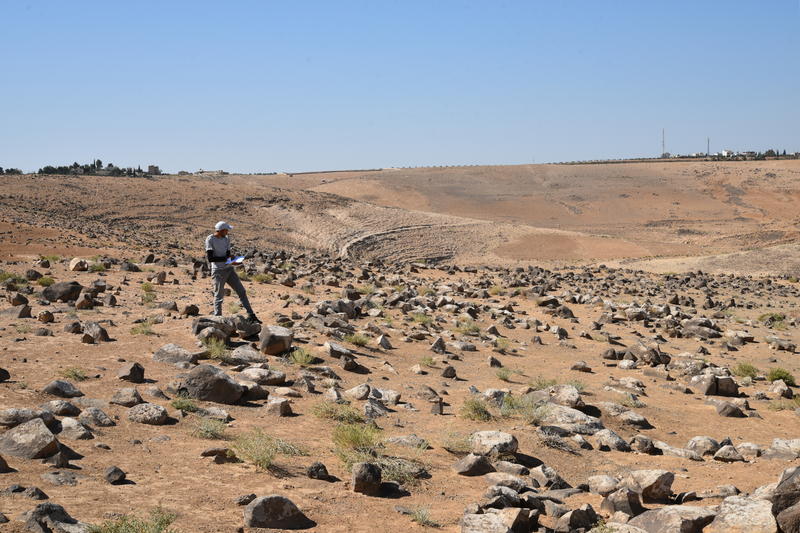 Banning, E.B. 2015. Settlement shifts and site visibility. Where are the Neolithic sites? Pp. 91-99 in B. Finlayson & C. Makarewicz (eds) Settlement, Survey, and Stone: Essays on Near Eastern Prehistory in honour of Gary Rollefson. Berlin: ex oriente

Flohr, P. 2022. A new overview of Late Neolithic sites in Jordan. Pp 97-121 in Studies in the History and Archaeology of Jordan 14. Culture in crisis: flows of peoples, artifacts, ideas. Amman: Department of Antiquities in Jordan.