The lost archaeological sites of the Mosul Dam Lake

A year ago my colleague Paola Sconzo from the University of Tübingen and I decided to start a new project on the endangered archaeology of the Upper Tigris region in Iraq.

This region, subject to political turmoil in the modern history, has remained almost terra incognita archaeologically until 2012. Thanks to the recent political upswing and its subsequent economic upturn, the region has finally seen the flourishing of a series of new enterprises. Among these are surveys and excavations, such as the Eastern Ḫarbur Archaeological Survey (EHAS) and the Land of Nineveh Archaeological Project (LoNAP), which we are respectively part of.

Initially we were mainly interested in collecting as much information as possible on all of those archaeological sites that had been lost at the beginning of the 80’s of the past century due to the construction of the Mosul Dam in Northern Iraq (figs. 1–2). Some of them, before being submerged in the lake, happened to have been briefly investigated in the framework of a large enterprise of salvage excavations, that saw a fruitful cooperation for about seven years (1981-1988), between the Iraq State Board of Antiquities and Heritage (SBAH) and several foreign teams. The results of such work emerged as fundamental for the reconstruction of the settlement dynamics of a region, which so far has not been reconstructed from an archaeological point of view.

During our preliminary research, we stumbled upon the existence of a hand-drawn map of the Mosul Dam region (1980), displaying the results of a targeted ‘emergency’ survey. This had been carried out by the Iraqi archaeologists prior to excavations to assess the archaeological potential of the region and endangered sites. Hence Dr. Paola Sconzo and I decided to look for this map and to try to retrieve the data from the survey.

The search has been a hard task: although the original version, in a relevant scale (1:60.000), was immediately distributed to all teams participating to the salvage project, it had never been properly published nor commented upon. A great help in this direction was provided by Prof. Elena Rova, an active member in the 1980’s salvage excavation at the site of Tell Karrana on the Tigris left bank and few kilometres south of Duhok, who still owned a copy of it in her archive and kindly sent it to us.

Therefore, we decided to digitise the data presented in the map, and to make them available to a wider public. Our detailed knowledge of the area, the analysis and photointerpretation of several CORONA satellite images (namely mission 1102 of 11 December 1967 and mission 1104 of 16 August 1968), and our meticulous cross-checking work contributed to creating a dataset of 149 sites which is now freely available on Harvard Dataverse repository and in the EAMENA database (fig. 3).

The work on the lost archaeological sites of the Mosul Dam represents, as mentioned, the first dowel of a broader research on the archaeological landscape of the Mosul Dam region that will be published in the near future. Another part of this work will be a remote survey of the area on the basis of the available declassified CORONA satellite imagery, that predates the construction of the dam, and that should allow the assessment of how many other sites, of which unfortunately we don’t have any information, were lost due to the construction of the Mosul Dam.

Figure 1 – Google Earth image of the Iraqi Upper Tigris valley in 1984 before the flooding of the Mosul Dam Reservoir. 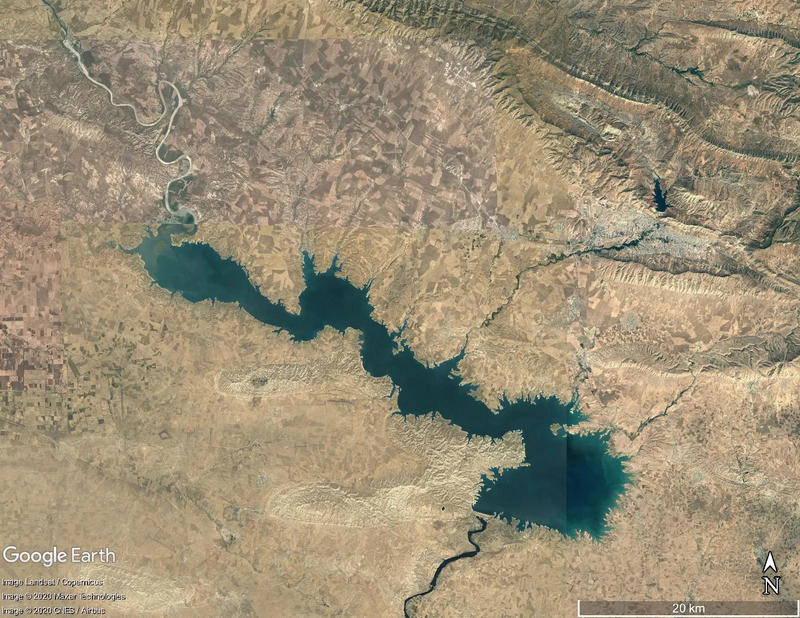 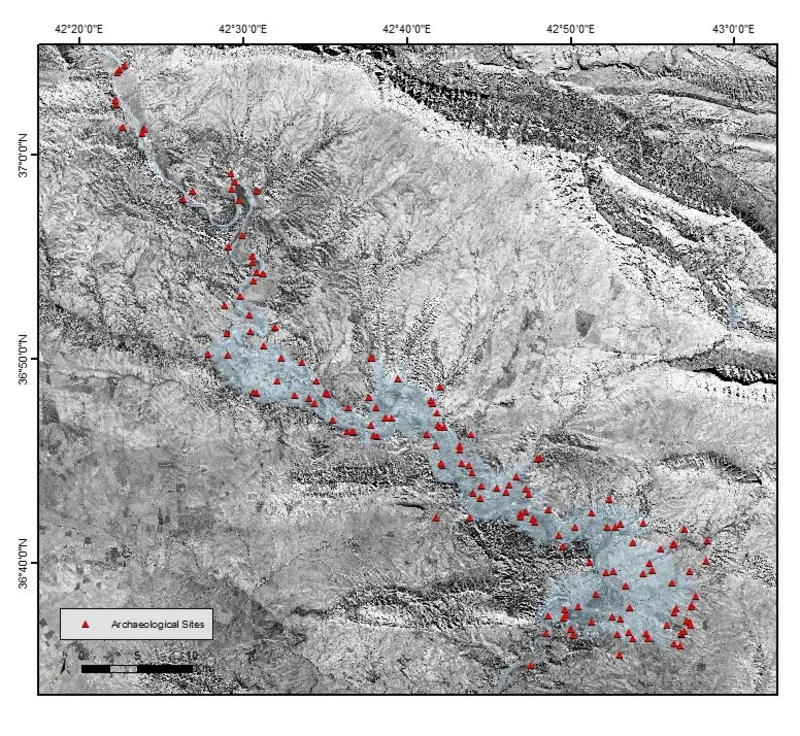