A practical introduction to landscape archaeology: investigating the endangered archaeology of Tabriz, Iran

In 2018–19, shortly after starting an MSc in Archaeological Science at the School of Archaeology, Oxford, I noticed an EAMENA poster in the common room. As my own work was focussing on isotope studies in the Near East, I was excited to find another opportunity to do research in this fascinating region. I was also drawn to the project’s focus on protecting cultural heritage, something I’m very passionate about.

I got in touch with Dr. Michael Fradley and went to visit the offices, which turned out to be right next door to the building I was sipping coffee in when I saw the poster! Michael introduced me to the various techniques EAMENA uses to look for and document archaeological sites across the Middle East and North Africa (MENA) region. This primarily relied on using satellite imagery from Google Earth to find sites and logging them in the online EAMENA database. While I was visiting Michael showed me a site he had found in Yemen using Google Earth, a whole fortress clearly showing in the picture. I was hooked and arranged to start coming in once a week to look for at-risk sites.

I started working on Yemen and found a number of interesting archaeological sites which I recorded in the database. Eventually though, I shifted to northern Iran, specifically looking at the city of Tabriz, to monitor change, looking at the project’s WW2-era reconnaissance photos. This was a great opportunity to go back further and see how this industrial city had grown, and what affect this had had on the surrounding archaeology over the last 75 years.

I started by going over each of the aerial photographs, trying to work out which part of the city and surrounding countryside they represented. This was a relatively easy task in the city-centre, where the road system is pretty much unchanged, but Tabriz has grown a lot in 75 years. This made identifying the locations in photos from the outskirts much harder. In some places all I had to go on were dirt tracks which had now been paved, as new residential and industrial areas had been built over the landscape, flattening it and erasing any trace of the original landscape features. In the hills outside the city I was even able to document a solitary fortress for myself (Fig.1)

As I was doing this work, I began to notice human-built features which had since been built over. One of the more common of these features were long strings of what looked like bomb-craters. At first, I thought these may have been defensive excavations, dugouts or similar, since they seemed to ring the city and these photos had been taken around the time of the allied occupation of Iran. My supervisor, however, identified them as probable qanats, underground water channels, with regularly spaced ventilation shafts to the surface (Fig.2). It was the tops of these shafts that I had spotted. The qanat identification was confirmed by one of the Iranian members of the team.

Having identified these, Michael suggested I focus on mapping the extent of the qanat systems and work on identifying the extent to which they had been damaged or destroyed between the 1940s and today (Fig.3). Unsurprisingly the damage was extensive, with a great many of the qanats completely destroyed.

This related to another interest of mine, which is the ways in which archaeological research can have a bearing on modern questions and debates about climate change and ecology. As qanats are dug in such a way to allow gravity to feed the ground water in hilly or mountainous areas, and the settlement(s); they provide a very sustainable method of procuring water. Historically, they were dug by hand and maintained by dedicated people who ensured that they were kept flowing. However, as populations have grown, this system no longer provided sufficient water, which is now piped to cities, requiring constant expenditure of energy. This really brings to light the impact population growth has on the demand for natural resources and the way we are having to adapt as our old methods are no longer sufficient. This drastic change is brought starkly to life when you realise that some of these qanats have been in use for hundreds of years, and the technology has been around for thousands! Where we used to have a sustainable water system, we are now building new homes to house more people who then need more water, but the old sources have been destroyed! It is a microcosm of the changes that have caused the climate crisis.

As my year at Oxford drew to a close my supervisor, Michael, drew up an outline of a research paper to be written using the results of my investigation, along with colleagues at Durham and Leicester universities. This has now grown well beyond what I expected and it’s really exciting to see my first research paper taking shape. The skills I learnt while working with EAMENA gave me a greater understanding of landscape archaeology, which complemented my more lab-focussed research project. I have since applied for doctoral courses both at Oxford and abroad, where I hope to be able to make further use of both stable isotope analyses and landscape studies in the Middle East.

One final source of excitement with this project, and which it seems fitting to end on, was my discovery of a small book called Blind White Fish in Persia. Written by Anthony Smith, an Oxford postgrad, in the 1950s based on his and a group of friends’ expedition to a small town in Persia to investigate the qanat systems there, it gave me a great deal of information on how qanats are constructed and maintained. It was also a highly enjoyable read in its own right, being essentially a story of travel to a very different culture and written in such an engaging style that I finished it more rapidly than anything else I read that year! It turned out I had even more of a connection to his project of 60 years ago, as he had lived on the same road in Oxford, Walton Street, as I did! 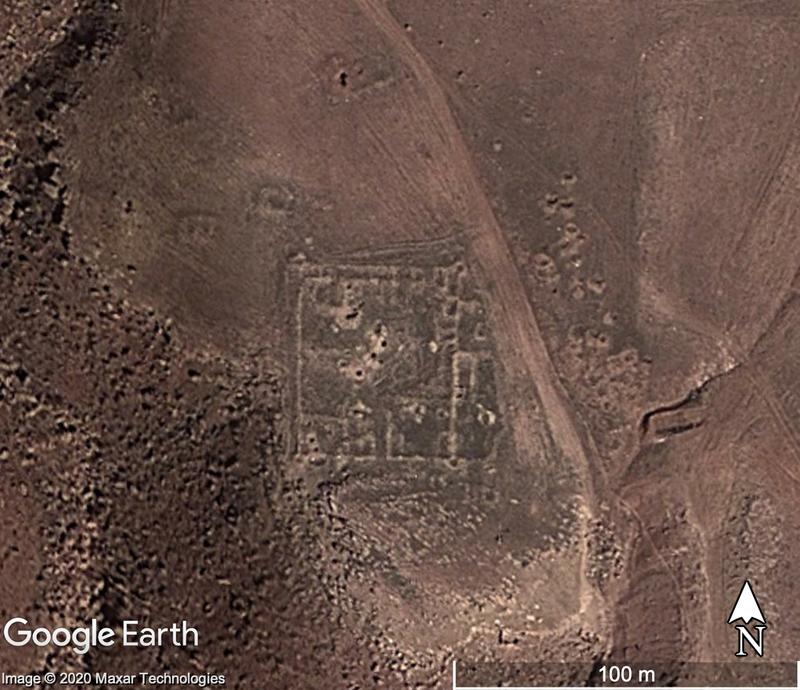 Fig.1. The foundations of a fortification with evidence of associated structure on a satellite image from 15 March 2015. Damage issues include the use of a dirt track and some potential looting pits. Map data: Google Earth, Maxar Technologies. 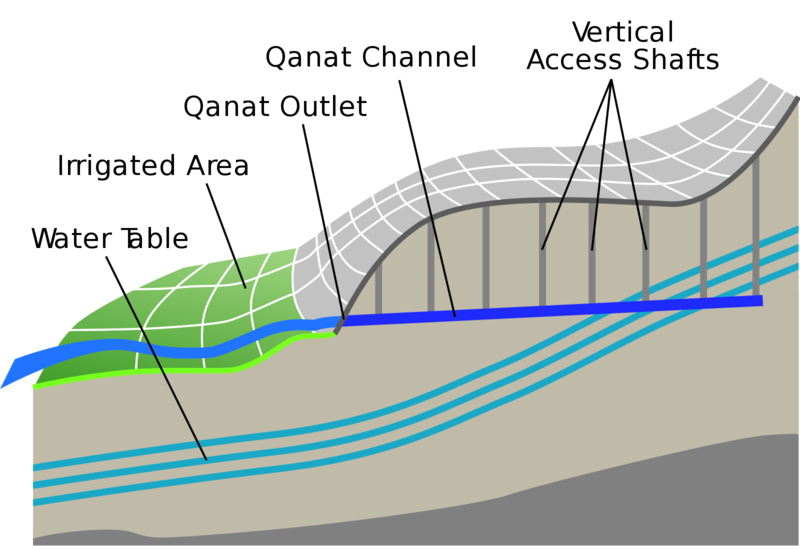 Fig.2. A stylised technical illustration of how a qanat system operates. By Amada44, Own Work, Public Domain https://commons.wikimedia.org/w/index.php?curid=3269373 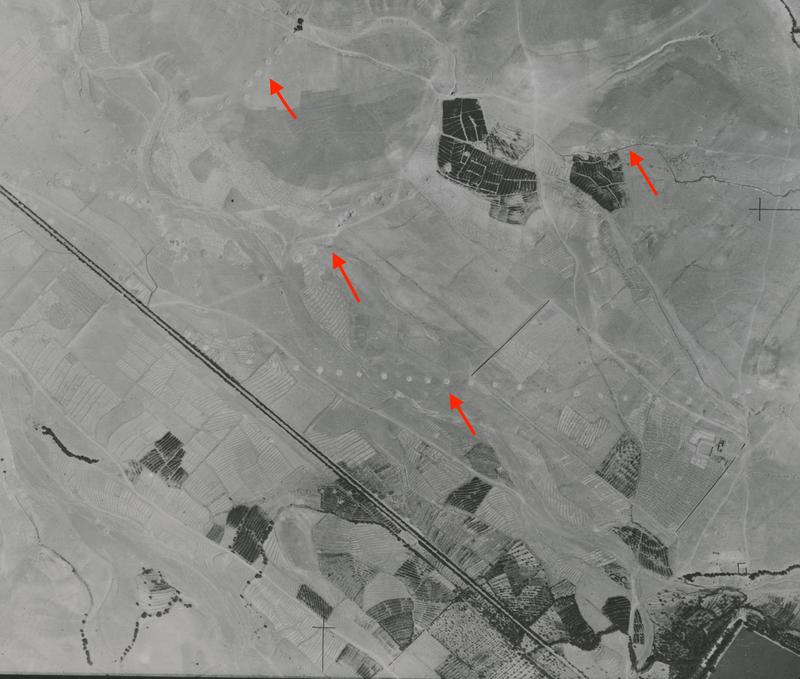 Fig.3. A vertical aerial photograph from Tabriz taken by 2 PRU squadron of the RAF on the 1 August 1941. The red arrows highlight the position of the visible qanat shafts, while part of the Elgoli reservoir can be seen in the bottom-right of the image. This area has since been built over by the expansion of the city. EAMENA image reference: IRAN-TABRIZ-1941-S-004-2s-208.