The SinaiArchaeoWater Project (SAW) is a collaboration between the remote sensing methodology of the EAMENA project ― identifying archaeological and heritage sites and disturbances and threats from satellite imagery ― and the Sinai Peninsula Research (SPR) project, which collected data from field surveys in the High Mountains of the Sinai Peninsula (Figure 1; Shams 2011, 2013). This collaboration was formed after Dr Ahmed Shams of SPR met EAMENA researchers following the blog post about the St Catherine Monastery previously published here (Ten Harkel et al. 2018). Ahmed Shams is now an external consultant for EAMENA at the University of Oxford.

The SAW project focuses on the High Mountains area around the St Catherine Monastery and the town of Katerina, thus encompassing ancient archaeological landscapes as well as one of Egypt’s newest and fastest-growing towns. The mountain range extends for 42 km in length (north–south) and 17.5 km in width (east–west). It is composed of plutonic and volcanic rock. The volcanic waves resulted in different types of rocks, which can be classified according to origin and age as follows: ancient volcanic rocks, primary plutonic rocks, young volcanic rocks (eroded black rock with high clay content), and young plutonic rocks (red granite/red rock).

Several regional and local development projects could benefit from the SAW project. The political instability in 2011 led to two particular regional projects in South Sinai intended as a local community trust-building process by the Government of Egypt (GoE):

a) the construction of more than 140 small-scale water storage dams for local agriculture;

In principle, integrated site/location planning is expected to be key to the sustainability of farms and water storage points, recently constructed in the upland valleys surrounding the physical boundary (perimeter) of the mountain range (below 1,700 m ASL) by the Ministry of Water Resources and Irrigation in collaboration with the Arab Organization for Agricultural Development (AOAD). Local examples in the vicinity of the mountain range include a newly-constructed farm and water dams in the El Sheikh A’wad area and the inner plains of the northern half of the mountain range and their main tributaries, i.e. the El Raha and El Melga Plains and Wadi El Sheikh respectively, where the impact has not yet been assessed. While the GoE concentrated its initiative in the upland valleys, an NGO started constructing an unprecedented and questionable number of more than 20 water storage dams in the high mountain valleys (above 1800 m ASL) in the past decade (Figure 2). Further environmental impact assessments for the above projects on the heritage and archaeological sites are required for integrated site management and governance. The area is rich in natural and cultural heritage sites, where the physical boundary of the mountain range overlaps with the Saint Katherine Natural Protectorate and its UNESCO World Heritage Site (WHS), the Saint Catherine Area (no. 954) (Figure 3).

Moreover, the GoE is receiving a $1 billion loan from the World Bank for Sinai development: the Sinai Peninsula Integrated Development Program. The new economic growth strategy specifies three economic gateways for the peninsula, where the so-called NEOM (New Future = Greek: Neo + Arabic word for Future: Mostaqbal) joint free zone area between Saudi Arabia and Egypt is the closest economic growth gateway to the mountain range on the Gulf of Aqaba in the southeast. Saint Catherine’s and the surrounding High Mountains of the Sinai Peninsula is the historic and cultural centre of South Sinai. The mountain range and its surrounding valleys also include a large number of scattered cultural heritage sites from the Palaeolithic (35,000 BCE) to local Bedouin and travel heritage, e.g. travellers’ inscriptions and camping sites (early-mid 20th century, but often with roots in the Islamic or Byzantine periods). An example of such a recent site is a recently re-discovered qanat, possibly constructed in the Late Byzantine or Early Islamic period but still in use today (Shams 2014). As discussed in Ten Harkel et al. 2018 as well, an unprecedented increase in the number of inhabitants and visitors to the region will subject – and has already subjected – the heritage and archaeological sites to a wide range of opportunities (management initiatives) and challenges (disturbances and threats).

But what will Sinai look like, both inland and on its coasts, after NEOM’s $10 billion investment? How will local Bedouin towns, villages, and remote mountainous agriculture benefit from the investment? And most importantly for the SAW project, how might the new investment better safeguard and enhance the re-use of cultural heritage assets across the mountain range? Ultimately, planned mitigation via impact assessment will be key to the success of future management and governance of heritage sites in the area.

SAW’s special focus is given to the safeguard and re-use of sites by the local Bedouin community, namely mountainous agriculture and water structures (conduits, wells, reservoirs, cisterns, etc). This will support small Bedouin farmers in producing high-value agri-products (medicinal plants, etc.) and supply their agri-tourism and eco-cultural activities in the remote valleys, while also contributing towards the management and governance of heritage and archaeological sites and implementing integrated watershed management across the mountain range. In order to do this, the EAMENA team is documenting sites recorded by the SPR in the EAMENA database and enhancing these with detailed condition assessments. Added to this are sites that the EAMENA team have identified through an independent Google Earth survey (Figure 1). Finally, the team are investigating the possibility of generating a detailed digital elevation model (DEM) of the area using remote sensing techniques, so that the sites can be modelled in their accurate landscape context. A similar model will help in mapping the water conduits network supplying the mountainous orchards with irrigation and in identifying flash-flood threats to the sites.

Ancient and modern agriculture in the High Mountains of the Sinai Peninsula is centred on 623 mountainous orchards and 351 agricultural sites, located on the banks of dry wadis (valleys), in a naqbs (mountain troughs) or in a farsh(es) (small mountain basins), mostly in the Red Granite areas and not all in use at the same time. The stones are chemically composed of quartz, biotite, muscovite, and feldspars, allowing the cultivation of fruit trees. The majority of the orchards in the high mountain valleys are of Byzantine origin, originally established between the 4th and 7th centuries CE. There is a high concentration of 25 ancient monastic orchards that are still in use, and 166 relatively newly constructed orchards, in the vicinity of Mount Sinai and Saint Catherine Monastery. This amounts to a total of more than 191 orchards, where the expanding urban-rural settlements and orchards put pressure on water resources (Figures 4 & 5).

Also, the project re-visits the buffer zone(s) and the overlapping boundaries of the municipal administration, the protectorate’s management zones, the UNESCO WHS, tribal territories, proposed special status areas, etc., in light of the demand for land resources and changes in past, present, and future land use, such as land-intensive commercial, recreational, or tourism installations, economic purposes, and municipal land policies. In other words, the SAW project will assess the functionality of the buffer zone through setting multi-level criteria:

a) clusters of archaeological sites of the same or consecutive chronologies;

b) socio-economic activities of the local community beyond the mountain range, e.g. tourism, mining, source of labour force, etc;

f) physical boundaries, such as valleys, mountain ridges, and plains;

In addition, the project explores the cartographic data from more than 1,000 maps for the Sinai Peninsula and its surrounding regions, held by the Perthesforum Gotha at the University of Erfurt in Germany, to better understand the development of landscape knowledge.

In sum, the SinaiArchaeoWater Project (SAW) is a cross-disciplinary endeavour ― opening significant potential to bring the heritage and archaeological sites in the region under an informed governance and management framework, using EAMENA’s remote sensing methodology and SPR’s field surveys in the High Mountains of the Sinai Peninsula. The SAW Project lays the foundation for a future inter-sectoral database with 14,000 points-of-interest (geo-records) to support informed decision-making and a full-scale assessment of the opportunities for, challenges (threats) to, and management of cultural heritage sites in the Sinai Peninsula. Further updates will be made available through the EAMENA website.

Shams, A. 2014. A rediscovered-new ‘Qanat’ system in the High Mountains of Sinai Peninsula, with Levantine reflections. Journal of Arid Environments 110: 69–74

Wilson, C.W. and Palmer, H.S. 1869. Ordnance Survey of the Peninsula of Sinai Part 1: account of the survey with illustrations. Southampton: Ordnance Survey. 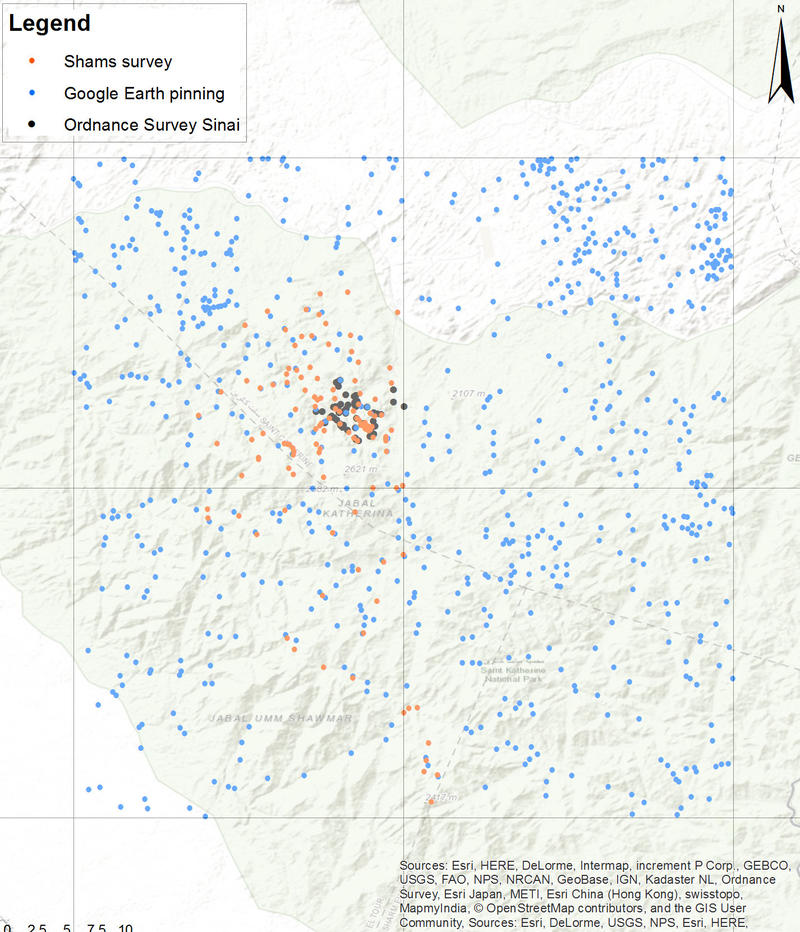 Figure 1 Remote sensing archaeology and field survey in the High Mountains of the Sinai Peninsula (Tur Sina) and the surrounding upland valleys by the SinaiArchaeoWater project ― a collaboration between EAMENA (blue dots) and Sinai Peninsula Research (SPR) (orange dots). The black dots in the background are additional sites recorded by the 19th-century Ordnance Survey of Sinai (Wilson and Palmer 1869). 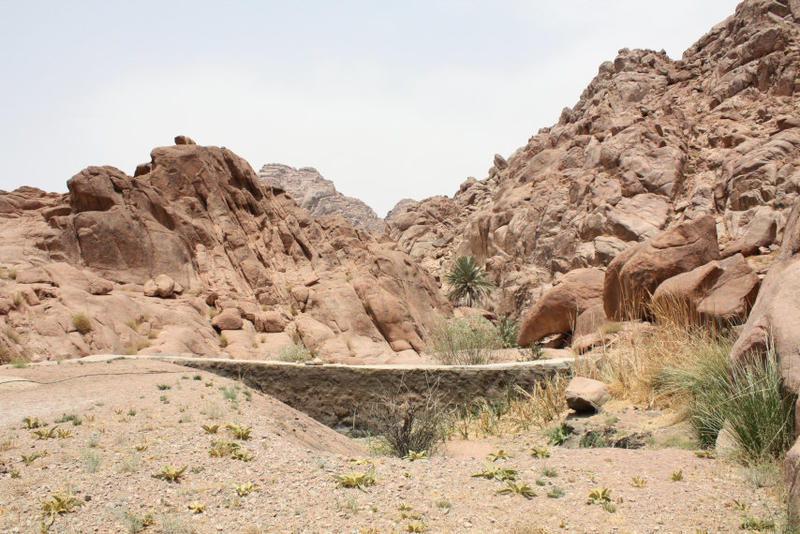 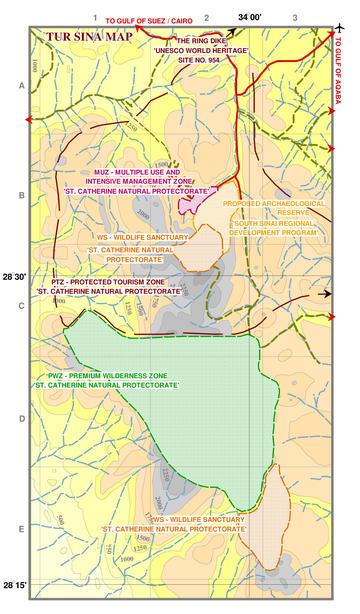 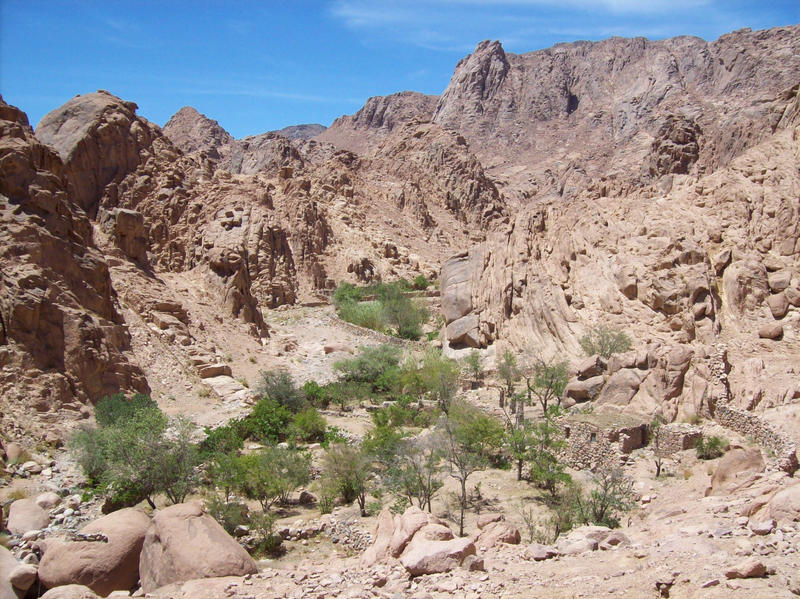 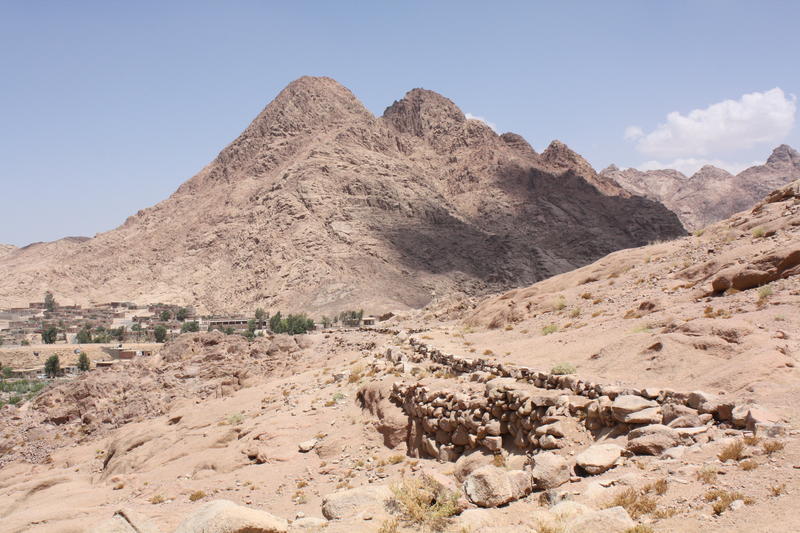