I have had the great pleasure of scanning the aerial photographs from the Sir M. Aurel Stein Archive from The British Academy over the last few weeks. Stein amassed the collection during an intensive survey seeking to investigate the Roman Limes of the East. The fieldwork was conducted during 1938 and 1939 in what was then the British Mandate territories spanning from Iraq to Jordan. He was aided in this massive task through the cooperation and help of the Royal Air Force (RAF). It is clear from Stein’s report (The Limes Report, see below) that the photographs he collected were the the product of his own directed reconnaissance, as well as the information gathered and photographs taken by the RAF in the process of monitoring the region.

We do not have access to the original negatives, but the c.12 cm square black and white prints held by The British Academy and kindly made available to us for digitisation and investigation, are a fantastic resource. From the 696 photographs digitised we have so far been unable to accurately georeference only 73, and most of these are photographs of traces of roads across remote landscapes, difficult to discern for Stein and perhaps almost impossible today. 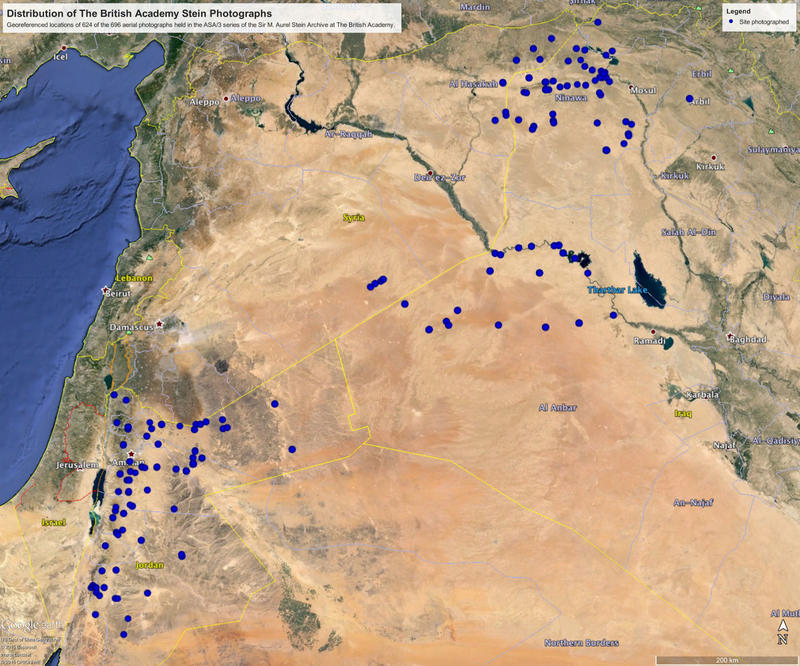 Stein’s aerial reconnaissance recorded many features that have not subsequently been investigated. Though a thorough and enthusiastic surveyor, Stein’s location for the sites and information given regarding them is not without error.

The process of georeferencing the photographs was a lengthy one, but has resulted in accurately locating the majority of the sites and further investigation of them can now occur. Particularly pertinent to our research is to see how the site has changed over time. Stein’s photographs record many archaeological sites before any modern landscape pressures had started to impact the region, and sadly for some for some of the sites, it may end up being the best or only record.

The material Stein collected in the course of his impressive career as a surveyor and archaeologist of Central Asia and the Middle East is a fantastic resource and we encourage all to utilise the material. You can find out more about the extent of the collection and where it is housed in the published handbook edited by Helen Wang & John Perkins (2008).