When I started my undergraduate degree in Archaeology and Anthropology at Oxford, I immediately began to consider where I would spend my four weeks of compulsory fieldwork. Perhaps exploring the pyramids in Egypt or excavating ancient Greek sites in Athens, or maybe something a bit closer to home, like volunteering at Stonehenge or The British Museum. The last
place I expected to be was sat at a desk in my bedroom. As the second wave of COVID-19 swept through the UK, it became increasingly apparent that undertaking fieldwork during a global pandemic would be a challenge (unless you were willing to take a shovel to your back garden). As a result, the School of Archaeology waived the fieldwork requirement for all first-year students, as they had done with our predecessors a year prior. I was disappointed to be missing out on fieldwork experience, which is why EAMENA’s offer of remote summer placements provided the perfect solution to the problem I was facing.

From the list of seven projects, spanning across the MENA region, I applied for “Surveying the Hadramawt Valley, Yemen”.This particular project focused on surveying the southern tributaries of the Wadi Hadramawt for settlement ruins, burials and other archaeological features, and involved digital skills such as using satellite imagery, making condition assessments,
and creating datasets to be uploaded to the EAMENA database. In an initial call with Dr Michael Fradley, who was running the project, I was given an overview of the region and some background reading which went further into the archaeological and environmental history of the southern Hadramawt. I was also able to access training videos via the EAMENA website, which gave me an idea of the type of work I would be doing before I started my official training. Overall, I spent 4 weeks working on the project. To begin, I was assigned one of the thousands of grid squares that EAMENA uses to divide the region into smaller sections to be surveyed and studied. After a brief introduction to Google Earth and the main archaeological features that I would come across and need to “pin”, I began systematically scanning the grid square column by column. By the end of my first day, I had managed to get through 5 columns. Only 64 to go! Luckily, thanks to practice and video calls with Michael where I was able to confirm whether features I had pinned were archaeological or just drivers doing doughnuts in the desert, I was able to scan the grid more quickly and identify archaeological sites with more confidence as time went on. It only took me 3 more days to complete the remaining 64 columns. The most common feature that I came across were small mounds of stones (also known as cairns) which were often used for burials and often are found in distinct “pendant” formations. 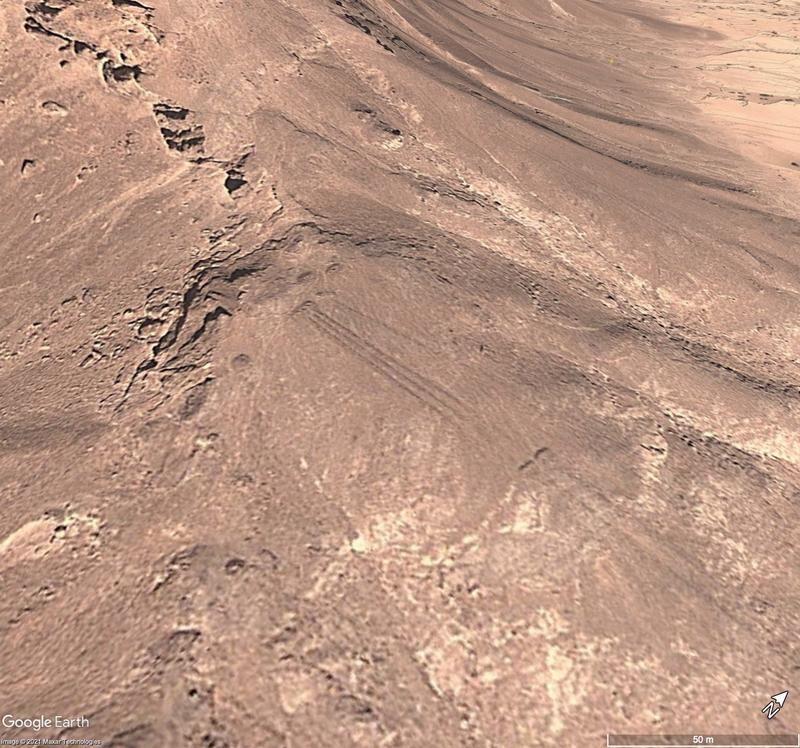 As well as surveying a total of 2 grid squares in Yemen, I also had the opportunity to work on a couple of squares in northern Iran to experience other archaeologies and environments withinthe MENA region. Here, I was mainly recording ancient underground water transportation systems, known as qanats, and tells, which are large mounds created by the accumulated refuse of generations of people occupying the same site. I also came across a few structures which appeared to be ancient forts.

Once I had finished surveying a grid square, the next step was to complete a spreadsheet that recorded all of the sites so that they could be uploaded in bulk to the EAMENA database. For each site being inputted into the database, information such as its location, function, form, condition, and any potential threats it faced also needed to be recorded. Although all of these
categories are important for gaining a deeper understanding of a site, it is the latter two which are integral to the aims and values of the EAMENA project.

In Yemen, it was mainly agricultural intensification and modern settlement expansion that were responsible for damaging or threatening the sites I had identified, whereas in Iran it was illegal looting. Creating a record of these sites may enable them to be preserved, or in the worst-case scenario provide information about them if they are no longer detectable. 2,700km2 of land, 738 sites, 25 video calls interrupted by bad WiFi connection and an overcome fear of Excel spreadsheets later, I’ve finished the fieldwork that I thought I would be missing out on due to the pandemic. I can honestly say that these four weeks have been one of the highlights of my degree thus far, so much so that I’m currently planning on basing my dissertation on the work that I’ve been doing. Although I might not have made it outside of my house, let alone to a world-famous archaeological site, my placement with EAMENA has shown me that the true importance of archaeology doesn’t lie in the site that you visit, but what you do to preserve it for future generations.