In partnership with the Department for Culture Media and Sport, the British Council’s Cultural Protection Fund has launched a new £2.4 million fund to support projects which protect cultural heritage at risk due to conflict or climate change, mainly in the Middle East and parts of North and East Africa. The EAMENA project has been awarded £125,000 from the Cultural Protection Fund for Knowledge transfer and establishing National Heritage Databases for Middle Eastern Partners. This is a partnership between the Universities of Oxford, and Durham, and the Department of Antiquities of Jordan, Ministry of Tourism and Antiquities (Occupied Palestinian Territories) and General Directorate of Antiquities (Lebanon). 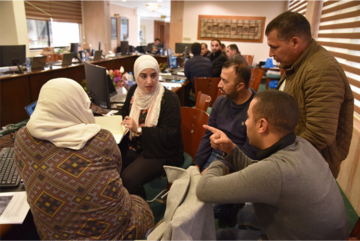 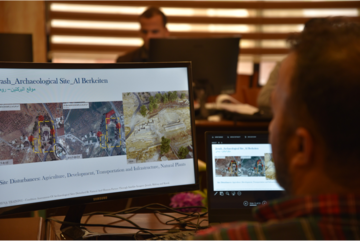 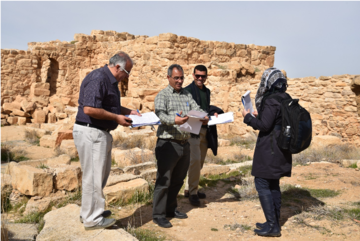 Fieldwork at the World Heritage Site of Um er-Rasas, Jordan

Part of the knowledge transfer will be to conduct two database management training sessions for nine trainees from the three countries to be delivered in person in Amman, as well as online. In addition, we will prepare two Massive Online Open Courses (MOOC) for Arches database use in English, Arabic and French and will undertake continual monitoring of course uptake. 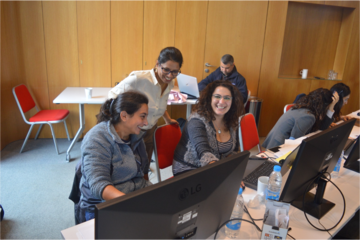 Participants in the CPF Training workshop in Beirut, Lebanon

Our work will also capture independent archaeological monitoring data for Syria and create a Syria-only database within the main EAMENA database. Participants in the CPF Training workshop in Beirut, Lebanon participating on-site condition assessments at Tell Koubba with EAMENA Project staff For more information, please follow the link to the British Council’s website and socials. 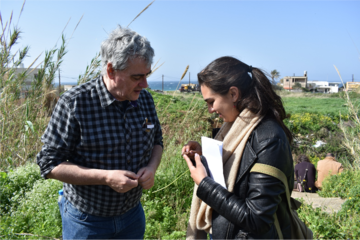 In partnership with the Department for Culture Media and Sport, the British Council launched a £30 million fund to help to create sustainable opportunities for economic and social development through building capacity to foster, safeguard and promote cultural heritage affected by conflict overseas.

The EAMENA project was awarded £1,615,025 from the Cultural Protection Fund for Training in Endangered Archaeology Methodology with Middle East and North African Heritage Stakeholders. This was a partnership between the the Universities of Oxford, Leicester, and Durham.

This three-year project trained archaeologists from six countries in the use of an open-source aerial recording methodology, designed for conflict zones and other areas where access on the ground is restricted. 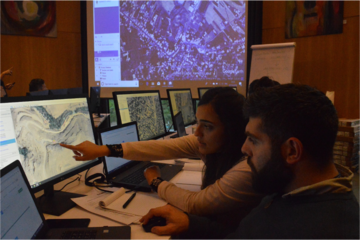 Participants in the CPF Training workshop in Beirut, Lebanon

Archaeologists from Jordan, Egypt, Lebanon, Iraq, Libya, Yemen, Palestine, and Tunisia were trained in the use of the EAMENA database, with the overall aim of enabling heritage professionals to better identify and assess threats to cultural heritage which had not yet been recorded

Since the Arab Spring in 2011, and as a result of on-going conflicts, archaeological sites and landscapes in the region came under increased threat with a break down in the authority of some local and national governments. The targeted destruction of iconic monuments by ISIS or Daesh provoked public outrage and raised the profile of the cultural heritage. Looting, too, has had an impact on the region’s cultural heritage fuelled by the illicit trade in antiquities. There is a longer-term threat posed by the political breakdown and the eventual post-war construction boom, which could result in the wholesale redevelopment of sections of these sites. The region has also seen a huge rise in populations so the pressure for more water, food and places to live and work is causing as much damage as any other agent of destruction.

The creation of an international inventory of sites that had not been recorded before is crucially important, so that knowledge and records of eroded, and in some cases completely destroyed, significant archaeological sites are maintained for future generations to use.

The EAMENA database has been developed by the Universities of Oxford, Leicester and Durham, with support from the Arcadia Fund since January 2015. The EAMENA database contains records created from the identification of archaeological sites using aerial photography, satellite imagery and ground observed information for over 150,000 sites. It the first open-access digital archaeological record for the MENA region (covering over 20 countries from Mauritania to Iran).

With support from the Cultural Protection Fund, this project provided two rounds of intensive training in EAMENA methodologies for up to 20 archaeologists in each country (160 in total) at events held in Amman, Tunis and Beirut, Alexandria, Aswan and Adis Ababa. The training covered:

The CPF funding also enabled the project team and its regional partners to produce a Guidance Note On Digital Documentation for Endangered Archaeology and its Protection in the Middle East and North Africa.