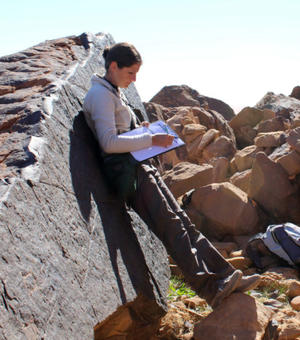 My research interests include population dynamics and settlement patterns in marginal environments and across periods of environmental change. I have considerable fieldwork experience in Libya, Western Sahara, and Saudi Arabia, as well as in Europe. Most recently I have directed the first excavation of a Neolithic site with faunal remains in northern Arabia.

My PhD at the University of Edinburgh was entitled ‘From Savanna to Desert: Animal Engravings in the Changing Prehistoric Environment of the Wadi al-Hayat, Libyan Sahara’. Between 2014 and 2017 I was a Postdoctoral Researcher on the Palaeodeserts project at the University of Oxford and at Max Planck Institute for the Science of Human History, and I currently hold a Dahlem Research Fellowship at Freie Universität Berlin. My research is focussed on rock art research, with a particular focus on the relationship between the depicted animal species and the environment and landscape experienced by the engravers or painters. Archaeological sites I work with are often threatened by agricultural expansion, looting or vandalism and I have developed methods to record and quantify damage to sites.