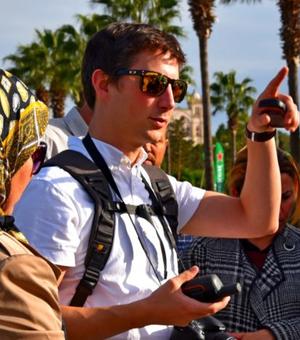 In recent years I have come to specialise in the design and use of spatial databases in archaeological research and heritage management.

After reading Archaeology and Ancient History at the University of Reading, I originally specialised in excavation methodology, working for about 5 years in British commercial archaeology. Later I completed a doctoral thesis on the subject of the rural economy of the Roman province of Africa Proconsularis under Prof. David Mattingly at the University of Leicester. After this, I went on to study in detail all of the information available about urban and proto-urban sites in the African provinces more generally at the University of Leiden for four years. At Leiden I also taught two MA courses: one on the subject of the Ancient Economy and another about Roman North Africa.

During my studies I have supervised research excavations in Britain, France, Italy, Tunisia and Libya, and taken part in several seasons of geophysical survey at a number of Hellenistic and Roman period urban sites in Greece. In recent years I have come to specialise in the design and use of spatial databases in archaeological research and heritage management. This includes the interpretation of aerial photographs, LiDAR data and satellite imagery and the use of GIS to map patterns across time and space. My doctoral research is published in the Journal of Roman Archaeology’s Supplementary Series (2015), and I have published numerous other excavation reports, articles and book chapters on the related topics.

Thanks to a grant from the Cultural Protection Fund I began working as EAMENA Training Manager for the countries of Tunisia and Libya in August 2017. This involves producing tutorials and training materials in Arabic language, and carrying out a number of training programs in Tunis (2017-2020), with the aim of spreading the use of satellite imagery in heritage management as broadly as possible within the Middle East and North Africa.