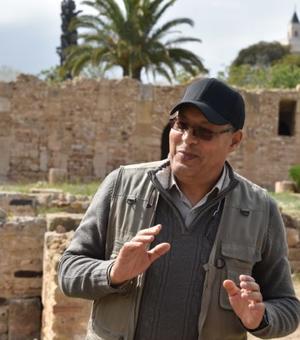 His current research interests include the archaeology of Roman Tripolitania, ceramic production and typology, and the development of a spatial-database for Libya’s cultural heritage.

Mftah Ahmed has been a tutor for the EAMENA training workshops carried out in Tunis in 2017, 2018 and 2019. He is currently Associate Professor of Archaeology and Ancient History at Az-Zaytuna University in Tarhuna, Libya. His teaching covers field archaeology methods and theory, landscape archaeology, and the use of GIS in archaeological site survey and documentation. Mftah was born on April 4th 1966 in Tarhuna, Libya. He graduated from the Department of Archaeology and Ancient History, University of Garyunis (Benghazi) in 1987. After his graduation he worked for the Libyan Department of Antiquities (DoA), starting his career as an archaeologist working with a team that was responsible for documenting the objects within the museum of Lepcis Magna. From 1995 to 2004 he was involved in several excavations and field surveys in collaboration with foreign missions. The majority of these were within the controllership of Lepcis Magna, but a number involved exploratory work undertaken by oil companies in the Libyan Sahara.

In October 2005 Mftah began his doctoral research within the School of Archaeology and Ancient History at the University of Leicester in the UK, which was completed in June 2010. During these years he gained experience in the archaeological heritage of the Sahara, participating in two significant archaeological projects that were directed by his supervisor, Professor David Mattingly: Desert Migrations Project and Peopling the Desert.

Shortly after returning home to Libya he became the first director of the Documentation and Digitalization of Cultural Heritage Centre at the DoA (2012–2015). During this period he collaborated with the American Archaeological Mission, taking part in its work in Libya. From 2014 onwards he began to work with the University of Durham, coordinating a number of training courses for Libyan archaeologists and conducting seven archaeological field surveys in different regions of Libya. The most important of these field-survey projects was the Gebel Nafusa Survey, undertaken in April and May 2015. An article related to this survey has been published in the Journal of Archaeological Method and Theory, V.23 (2016): Developing a Collaborative Strategy to Manage and Preserve Cultural Heritage During the Libyan Conflict. The Case of the Gebel Nāfusa. Mftah is also currently a member of two projects funded by the British Council’s Cultural Protection Fund: Training in Action and Endangered Archaeology in the Middle East and North Africa EAMENA, the latter also funded by Arcadia. His current research interests include the archaeology of Roman Tripolitania, ceramic production and typology, and the development of a spatial-database for Libya’s cultural heritage.