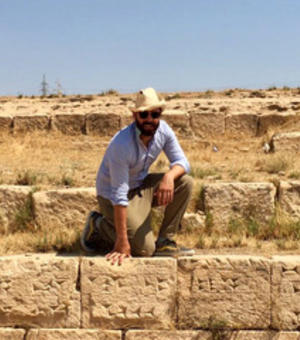 Mike Fisher is a Group Leader in Digital Archaeology at the Max Planck Institute for the Science of Human History, working with the MAPSS (Mongolian Archaeology Project: Surveying the Steppe) research group to implement a geospatial database and digital recording system for the archaeological sites of Mongolia.

He received his BA from the University of Notre Dame in History and Middle Eastern Studies and his MA and PhD from the University of Chicago in Near Eastern Art & Archaeology. Focussing on the emergence of complex sociopolitical systems in Late Chalcolithic Syria, he began developing digital methods for capturing, storing, and interrogating archaeological data. During his graduate studies, Mike pursued a parallel interest in digital cultural heritage preservation and became the Field Director of the University of Chicago partnership with the National Museum of Afghanistan, overseeing the digital inventory, conservation, and rehousing of the archaeological and ethnographic collections stored in Kabul and provincial museums. While finishing his PhD, he began working for the University of Chicago's Afghan Heritage Mapping Project, using remote sensing methods to detect at-risk and damaged archaeological sites across Afghanistan. He co-edited the volume Preserving the Cultural Heritage of Afghanistan, which documents the rich cultural patrimony of the country and the means available for protecting it, against the backdrop of four decades of armed conflict and political turbulence.

As a postdoctoral researcher at the University of Oxford, Mike oversaw the further development and refinement of the EAMENA project's geospatial graph database, while researching the impact and ethics of remote sensing and data management systems for archaeological landscapes. He is also the Co-Director of the University of Chicago field excavations at Tell Surezha, within the Kurdish Regional Government, which expands on his doctoral research exploring sociopolitical transformations in late-prehistoric Mesopotamia.