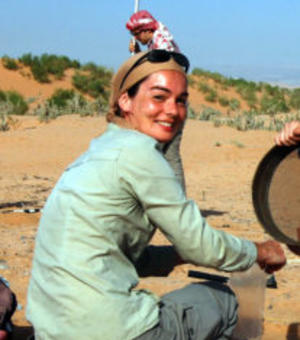 I have studied the effects of climate change on past Middle Eastern societies by compiling information, especially radiocarbon dates, into a database

I am an archaeologist specializing in the Middle East, where I mainly focus on the interaction between people and their environment. I have been part of the EAMENA team since 2016, where I have focused mostly on the Levant and Arabia, and have a special interest in agricultural landscapes and using GIS methods for detecting prehistoric sites. As a spin-off of the latter, in combination with my interest in human-enviroment interactions, I have set up the Karak Neolithic Survey in Jordan. I have been involved in EAMENA-CPF training since 2017, and since July 2020 I have been the Training Manager for Yemen and Egypt. In addition, I was co-founder and am currently part of the Mapping Digital Heritage in Jordan (MaDiH) project, of which EAMENA is a partner.

After my PhD at the University of Reading on the use of crop stable isotopes for the reconstruction of past water availability, I was a Post-Doctoral researcher at the same university. During that post-doc I studied the effects of climate change on past Middle Eastern societies by compiling information, especially radiocarbon dates, into a database – establishing synchronicity between climate and social change is the first step before even starting to think of causality between the two. I have also been generating new climate data based on a 2500-year-old speleothem record from Iraq. I have participated in excavations and experimental archaeology projects in Jordan, Lebanon, Iraq, Syria, Egypt, the UK, and the Netherlands.

You can find more information and my publications on my ResearchGate, Academia, and LinkedIn pages.