EAMENA’s collaboration with regional partners in the MENA region

The two previous blog entries have looked at ways in which we at EAMENA are mapping archaeological sites, whether extant or now destroyed, by analysing satellite imagery and historical aerial photographs. With tens of thousands of sites already recorded in the span of four months across Libya, Egypt, Jordan, Syria, Saudi Arabia and Yemen, these techniques are proving incredibly successful in documenting the cultural landscape of the MENA region.

But EAMENA is as much about recording archaeology as it is about enacting strategies for its preservation. For this reason, we regard collaboration with our regional partners in the Middle East and North Africa as one of our top priorities.

So far, two avenues are being pursued to act upon this. On the one hand, we are teaming up with regional antiquities departments and directorates to produce risk assessments on small-size test areas affected by wide range of threats. The first case study of this kind was conducted in partnership with the Department of Antiquities of Jordan in March 2015. It involved the remote mapping of archaeological sites in the immediate vicinity of the city of Madaba (c.25 km south-west of the Jordanian capital of ‘Amman), and particularly those likely to be affected by the laying out of a ring road currently being built around the city. By collating historical aerial imagery (dating to 1918 and 1953), satellite imagery (mostly DigitalGlobe imagery freely available via Google Earth), survey and excavation data and even early traveller reports (dating as early as the beginning of the 19th century), we produced a report listing 141 sites which are likely to be directly or indirectly affected by this building project. Seemingly destroyed sites were also included, for while their remains may be invisible to us from the air, they may well be picked on by our Jordanian partners on the ground. Indeed, our report is meant to aid the Department of Antiquities of Jordan with their surface survey of the ring road buffer zone – which is currently in progress. 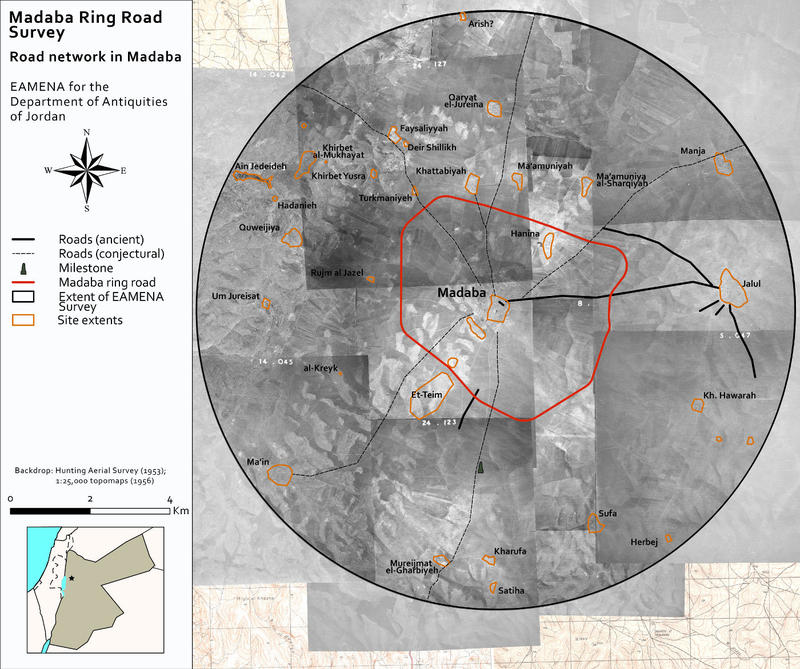 On the other hand, we are developing an international conference and workshop series entitled ‘Protecting the Past’, which, over the coming two years, will provide a venue for discussing strategies pertaining to cultural heritage management, but also for training local stakeholders in the techniques and toolsets used in our day-to-day work. Some of these events will take place in Oxford, while others will be organised in partner countries.

The first event of this series will take place in Amman, Jordan, between 26 and 29 September 2015.  Co-organised by EAMENA, the Department of Antiquities of Jordan and the University of Erlangen-Nürnberg, this event is under the patronage of HRH Prince al-Hassan bin Talal and is co-sponsored by a number of Jordanian and international organisations. The purpose of this conference is to discuss how recent advances in the archaeological investigation of northern Jordan can influence a wider approach to understanding Jordan’s cultural heritage through discovery, re-interpretation and better presentation. Among the sessions planned for the conference is a round table on the impact of geodatabases and remote mapping for cultural heritage monitoring and protection. EAMENA directors Dr Robert Bewley and Prof. David Kennedy will be among the discussants.

Further details on this and other ‘Protecting the Past’ workshops will be published on this website and on www.protectingthepast.com. I will also be blogging about it again in the coming weeks.