On the ground with the Aerial Archaeology in Jordan Project

For the last two weeks, Robert Bewley, Andrea Zerbini, and I have had the huge pleasure of working with the Aerial Archaeology in Jordan (AAJ) Project on its most recent season of aerial reconnaissance. AAJ has conducted an annual aerial survey of Jordan’s archaeology since 1997 and has created an amazing record of its landscape, heritage, and archaeology. (All of their images can be found on their Flickr page through their website: www.apaame.org). The EAMENA team is using the photographs and working with AAJ to monitor, research, and communicate the threats to archaeology in the region. We also used the time in Jordan to visit sites on the ground to investigate and verify interpretations. I had the pleasure of accompanying Professor David Kennedy on the ground to a handful of sites to do just this. 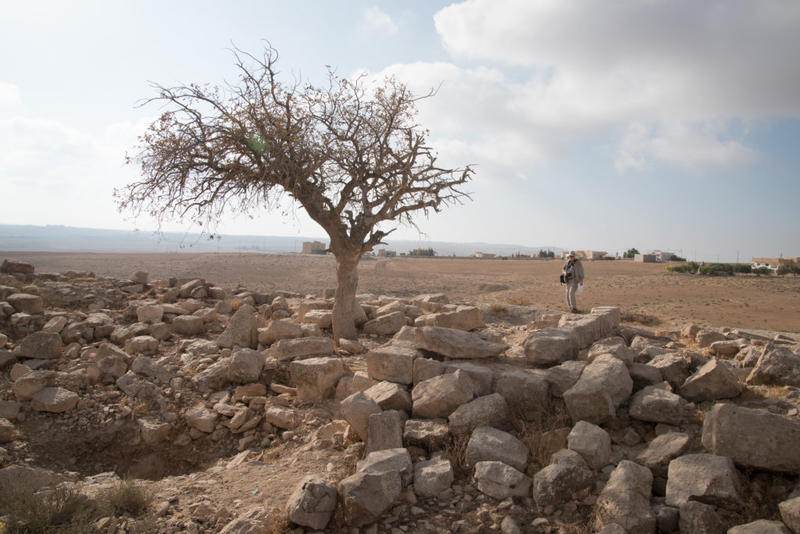 Our first stop was the village of Mesheirfeh, where low ruins are scattered alongside the modern inhabited village; cut stone can be seen reused in dwellings now being used to pen sheep and goats. Early archaeological surveys in the region estimated the site to be possibly as early as the Nabataean period (Glueck 1934 EEP I: 37–38). A large structure of well-dressed stone is the most prominent ruin now visible at the site, but only stands a few courses high. Other traces of structures and cisterns and/or caves can also be seen. The reuse of the stone and deposition of soil over the site means it is quite difficult to discern the full extent of the features. 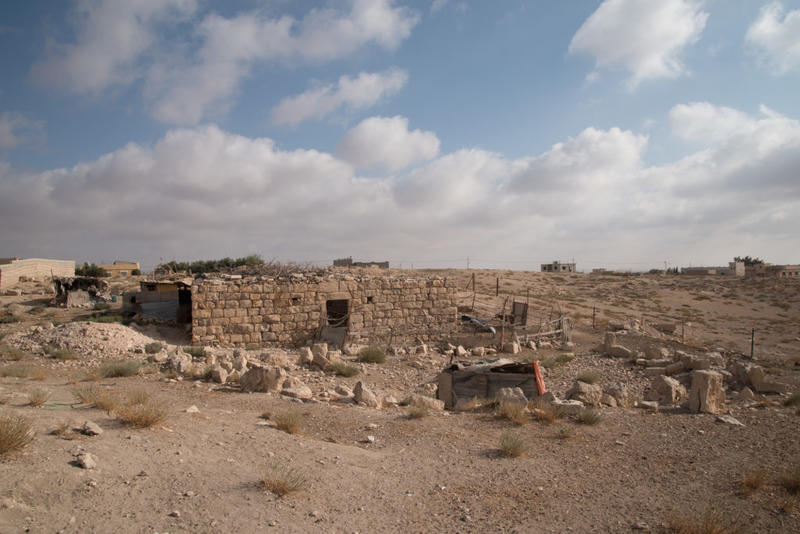 Our second stop was the World Heritage Site of Umm er-Resas. A Roman fortress dominates the main site and the large ruined village is famous for its numerous churches and incredible mosaics; it is well worth a visit if you are ever in Jordan (the entrance fee is currently 3JD). We concentrated our investigations on the north part of the site, known also as Sarbut, an area separated from the main settlement site but within the World Heritage Site designated area. Here a prominent stylite (hermit monk) tower still stands thanks to restoration work by the Department of Antiquities and carries the marks of centuries of visitors on its outer surface, much as the tombs of Petra carry the graffiti of early travellers. 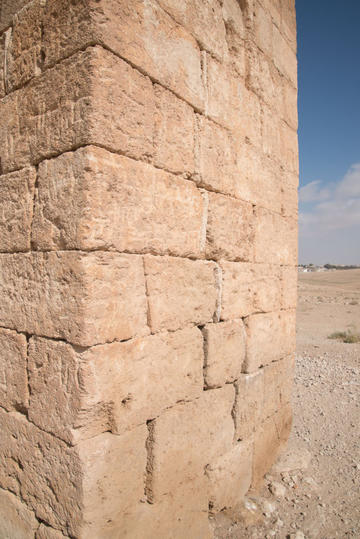 Numerous inscriptions on the surface of the stylite tower. Photograph: Rebecca Banks.

Surprisingly, as the World Heritage Site is fenced, the area around the tower shows the footprints of grazing sheep and/or goats, and modern graffiti mar the surface of a nearby structure. We inspected what appear to be old illicit excavations at a chapel (visible on satellite imagery as far back as 2007), located between the area of the stylite tower and the main settlement of Umm er-Resas. A crypt was exposed and the possible reliquaries or sarcophagi had been pulled out and discarded. More recent damage, probably from natural degradation, is apparent in the collapse of the base of a ceiling arch. 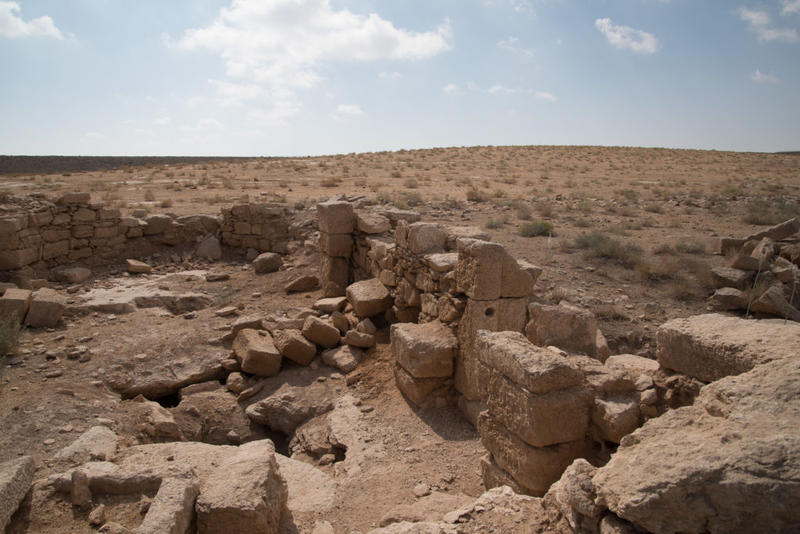 The next day we walked between the Roman forts of Qasr eth-Thuraiya and Qasr Bshir to try and find traces of the Roman road. Stretches of Roman road were once prominent features in the landscape, recorded by 19th century travellers and archaeologists such as Père Germer-Durand, and Rudolf Ernst Brünnow and Alfred von Domaszewski. 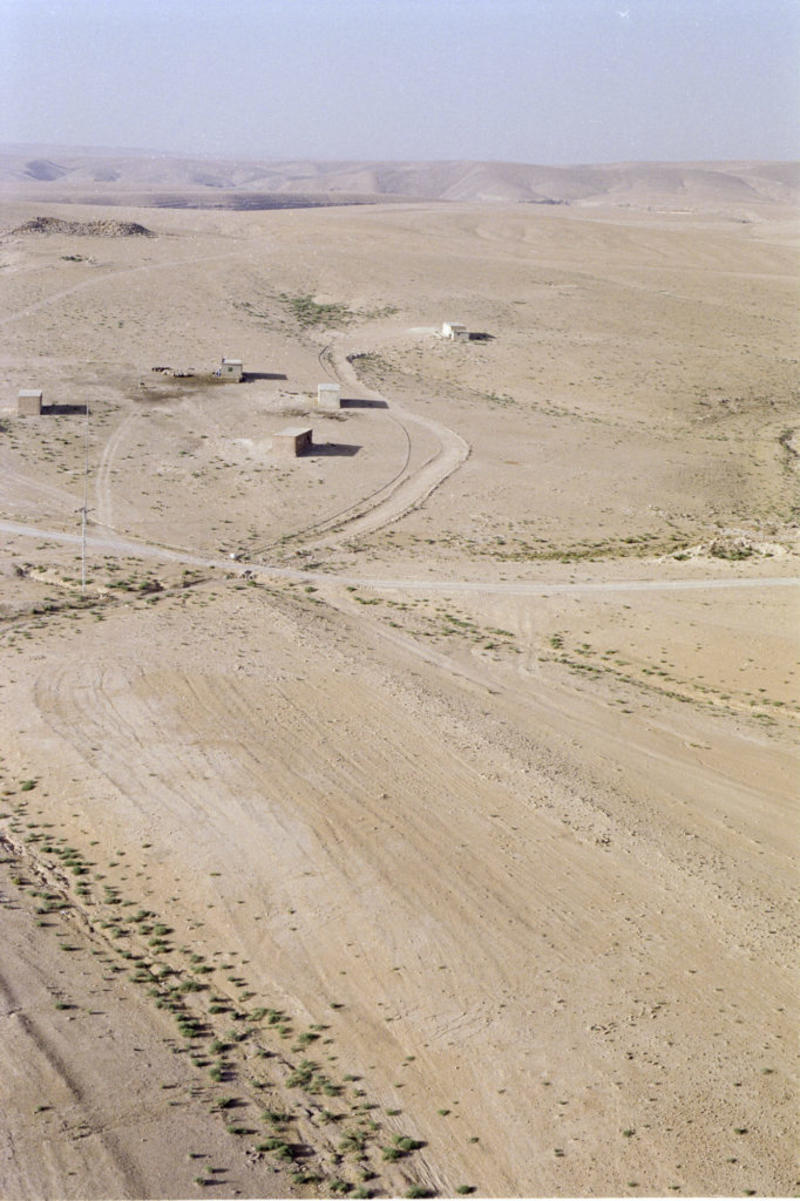 These roads are now increasingly difficult to trace. Kerb stones and/or paving can be hidden underneath accumulated deposits, dislodged by agriculture and erosion, or structurally compromised by modern development (in one example, a wind farm). We walked a short stretch of Roman road north of Qasr eth-Thuraiya that has been previously photographed, but we soon lost sight of its path amongst the ploughed fields. 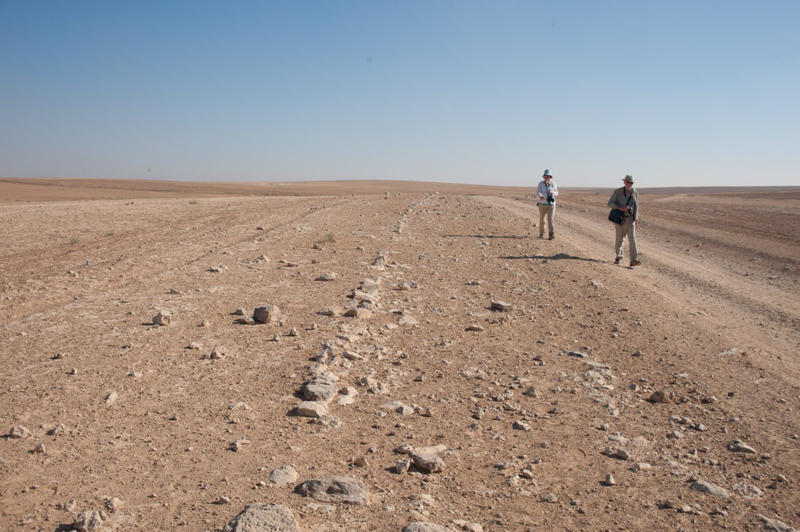 Heading north and descending into the Wadi Sueida and up the opposite side the evidence for a road is not prominent. The profile of where the edge of the road had to be built up to create a level track against the northern slope of the Wadi Sueida was just visible in places and still affords the easiest route to cross this section of the steep-sided valley. The natural beauty of the location made the crossing an enjoyable one: geological folds are clearly visible along the wadi slopes and tall wildflowers were numerous. 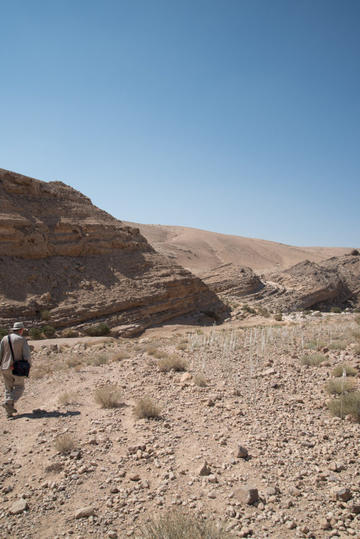 David Kennedy following the faint trace of the profile of a road into the Wadi Sueida. Photograph: Rebecca Banks.

As we crossed the Wadi Sueida (a tributary of the Wadi Mujib) I noticed that a once-prominent tower on a low hill (Limes Arabicus Survey Site 45) appeared to have collapsed. I remembered the tower from previous surveys of the site by the AAJ project; it was memorable because the southern face of the tower stood over three metres high. 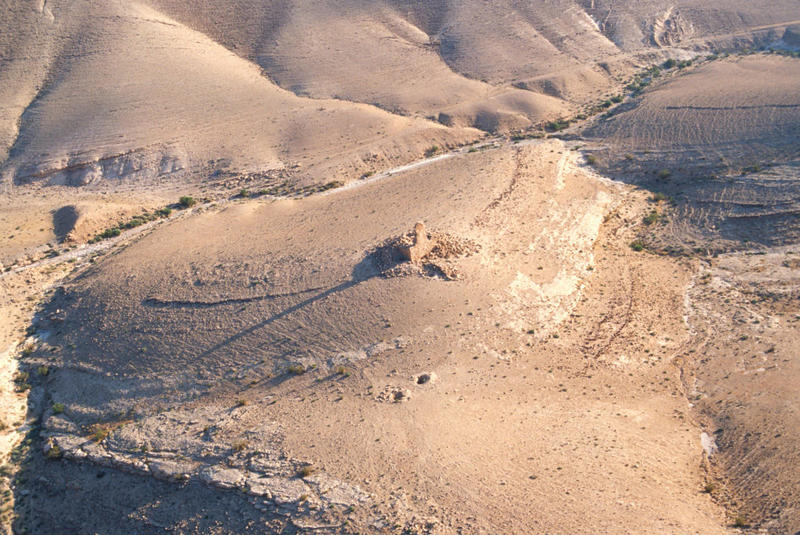 Aerial photograph of the tower from 2004 showing the preservation of the southern face. Photograph: Robert Bewley, APAAME_20040601_RHB-0016.

Upon closer inspection we saw the tell-tale signs that a large piece of machinery had been active at the site. The motive was unclear: possibly displacing collapsed rubble in order to dig the site for ‘treasure’, or removing the well-worked stone for building material. The machinery may have caused the collapse directly, or indirectly by removing the rubble that had provided support for the remaining upstanding features. It was sad to see a standing feature that had survived almost 2,000 years in isolation brought low by modern disturbance. Examination of Google Earth showed the collapse probably occurred between 30 May and 16 November 2013. 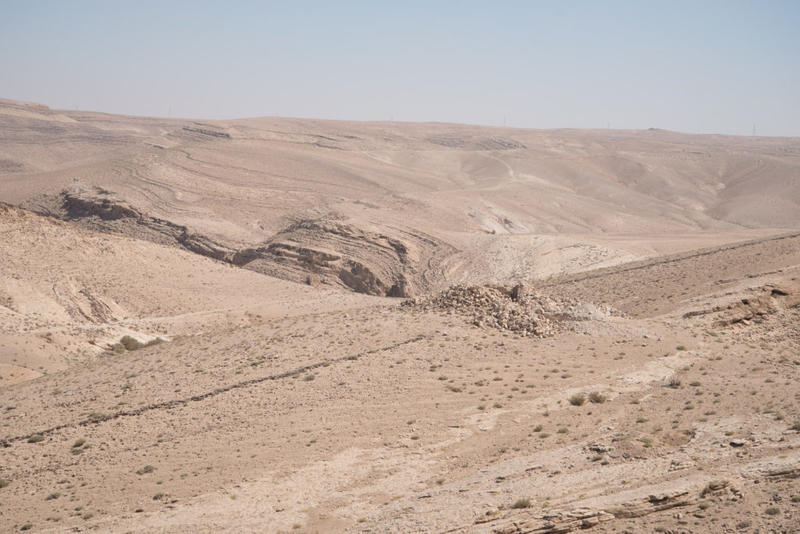 A view of the tower today from the south-west. Photograph: Rebecca Banks.

Our final destination, Qasr Bshir, is a marvel to behold, and is arguably the best-preserved Roman fort in the world, with its inscription surviving in situ above the entrance, telling us the name of the site and when it was built. It was a long-held wish of mine to see this site for myself, and after a 10 mile walk across Jordan’s landscape on quite a warm day, the fort (and its shade) were a very welcome sight. 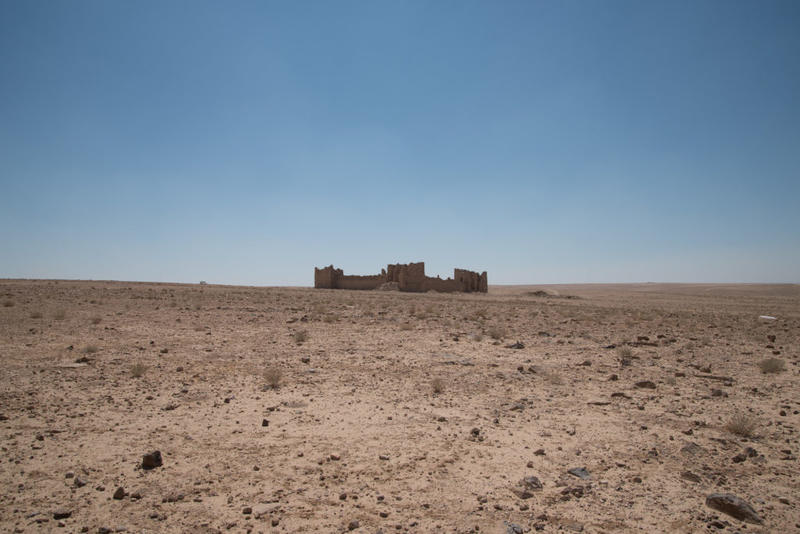 The staircases in the corner towers can still be climbed to a great height to view the stark landscape, as well as the rooms and cisterns, easily visible amongst the natural collapse of the structure, though sadly, litter and graffiti are also abundant. A lovely surprise was to find a bird of prey, possibly a lanner falcon, flying out from one of the towers. We hope we did not disturb it for long.

These ground visits have been followed by an intensive period of flying with three flights focused on the south and central parts of Jordan, two in the badia (eastern) region, and one in the north. I hope to share with you some of what we have recorded with AAJ shortly. Watch this space.