Historical aerial photographs are of great value for the EAMENA project, and we have recent launched an appeal to locate any held in archives or private collections. They can be analysed in conjunction with more recent photographs or satellite images and used to identify archaeological sites that have since been lost or altered by subsequent development, or to assess broader landscape change. For instance, we have previously discussed our work on the Auriel Stein collection, and are also in the process of digitizing a major collection of vertical aerial photographs of Yemen held at the Bodleian Library at Oxford. In many respects this builds on the substantial earlier work of the closely affiliated APAAME Project in gathering together historic aerial imagery.

In some cases, however, there are documented collections of aerial images that prove far more difficult to locate. One example of this is the photographic survey and reconnaissance work of 14 Squadron of the RAF. Formed in 1915 as a squadron of what was then the Royal Flying Corp (RFC), and operating initially in Egypt and then in British Mandate Palestine and Transjordan for much of the inter-war period, the squadron produced a mass of photographic material. Unfortunately, while a large part of the WWI aerial imagery captured by the Imperial German Air Force and 1 Squadron of the Australian Flying Corps (known as 67 Squadron during the war under the RFC/RAF) survives, only a small proportion of the 14 Squadron output is extant in open collections.

In March 2017, members of the EAMENA team headed to the National Archives in Kew to go through the surviving records of the former Air Ministry in search of any surviving elements of these collections or indications of where they may have been deposited. The team had some notable success, such as locating a file of c.100 reconnaissance photographs taken in conjunction with the advancing British campaign across the northern area of the Sinai Peninsula in 1916 (TNA: Air 1/2273/209/71/9/9B). In other cases we could only locate the campaign maps that were drawn up using the photographs taken by 14 Squadron. One example of this is the work of ‘C’ Flight of 14 Squadron who moved to the Rabegh area to the west of Mecca in what is now Saudi Arabia in support of the Arab Revolt from late 1916 through to the Spring of 1917. Part of this period was spent undertaking photographic surveys to produce maps, and while the surviving maps state that they were drawn up using information from these images (TNA: WO 303/457), we were unable to locate the actual photographs.

The records of the Air Ministry make it clear that aerial photographic survey continued unabated in the inter-war years. Tantalizing files mention photo-mosaics of Jerusalem being built up in 1920 (TNA: Air 1/1730/204/126/63) and of Tiberias, Jaffa and Gaza in 1924 as well as operations designed specifically to photograph excavations and archaeological sites such as Safed for the Department of Antiquities, Jerusalem. Photographs of archaeological excavations also continued to be taken during the 1930s, including sites around Jerusalem and at Athlit. A detachment from No 6 Squadron was also particularly focused on this type of work in 1932 for the Survey Department of the Palestine Government (TNA: Air 1/2273/209/71/9/9B). Again, however, only a few of the photographs are known to have survived.

A notable change occurred from 1931 onwards with the arrival of Reginald Llywellyn Brown, of the Royal Engineers, a remarkable figure in the world of cartography and the application of photogrammetric techniques. He appears to have worked closely with 14 Squadron in planning the earliest aerial photo survey campaigns that would feed into the production of accurate maps across Mandate Palestine and Transjordan (Brown 1975, 522-4). The squadron were involved in survey and mapping in the Ma’an-Akaba area in 1931, while mosaics of Jerusalem and Tel Aviv were completed in 1934 (TNA: Air 1/2273/209/71/9/9B). A total of six out of a planned sixteen maps were also produced across areas to the north and east of Azraq, in modern-day Jordan, that depict a range of archaeological sites such as desert ‘kites’, utilizing aerial photographs taken by 14 Squadron in 1931 (TNA: CO 1047/748). What we do not know is whether 14 Squadron also took the photographs for the area due to be covered by the ten remaining maps that were never produced; the EAMENA team found no trace of them during their visit to the National Archives. In terms of archaeological work, the squadron would contribute to O. G. S. Crawford’s archive of Middle Eastern sites (Crawford 1929), and fly Nelson Glueck across areas of archaeological interest in 1936 (Glueck 1937a; 1937b). The squadron also undertook seventeen flights in 1934 across southern Transjordan, taking over 2,300 vertical and 150 oblique photographs in the process (TNA: Air 5/1241). This development of mapping techniques would culminate in the work of 680 Squadron in the systematic capture of vertical photographs across Mandate Palestine in 1944-6.

Fortunately, a large portion of the aerial photograph series from 1945-6 survives in a collection at the Hebrew University of Jerusalem and as a poorly indexed series at the National Collection of Aerial Photography in Edinburgh. While fragments of the imagery collected in the 1930s by 14 Squadron survive in the National Archives, there is no trace of the bulk of material documented elsewhere in the Air Ministry records.

On a more positive note, we do have the maps that were produced using many of these aerial photographs, giving a subjective account of the changing landscape and in some cases identifying archaeological sites. The 1:50,000 maps (G.S.G.S 3937) showing landforms, villages and archaeological sites from the area near Azraq in Jordan (TNA: CO 1047/748 and also held at the Bodleian Library, University of Oxford) are a good example. Although only 6 map sheets are published (sheets 7, 9, 10, 11, 13 and 14), they nevertheless represent an important resource, although extracts cannot be reproduced here for copyright reasons. Figure 1 maps the (approximate) location of some prehistoric features in an area about 70 km east of Azraq, where available GE satellite imagery is limited to a single low resolution layer (2016 Cnes/Spot Image); the resolution of this imagery is not good enough to identify archaeological features with ease. The maps also add to our knowledge in areas with better availability of satellite imagery. For example, figure 2 depicts the surviving traces of what once was a much denser cluster of prehistoric features and kites north of Azraq, clearly highlighting the threats that construction and agriculture pose to Jordan’s archaeological heritage. 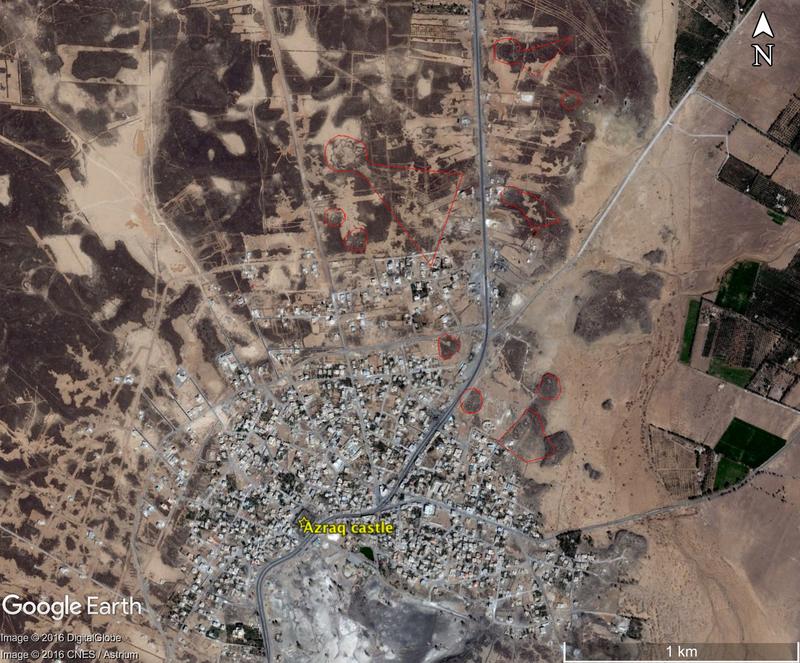 In sum, it seems probable that the bulk of the aerial photographs produced by 14 Squadron during their time spent in the Near East may simply not survive due to the unfortunate vagaries of preservation of these types of documents over the last century. The EAMENA team, however, will continue to follow potential leads in an attempt to recover more of this material, which would be of value not only to archaeologists, but also others interested in the changing landscape of the region and those interested in the history of cartography and photogrammetry in the Near East. This post offers a very brief, selective account of the photographic of 14 Squadron, which occurred alongside the survey missions of other squadrons based in the Middle East, and the efforts of the EAMENA project to locate these archives. It is also hoped that this interim report will help bring our work to the attention of any other researchers with an interest in any aspect of the photographic output of the RAF in the MENA region, and who would be happy to exchange knowledge in order to help track down what happened to this important dataset.

Glueck, N. 1937a. ‘An aerial reconnaissance of southern Transjordan’. Bulletin of the American School of Oriental Research 66, 27–28.

Glueck, N. 1937b. ‘An aerial reconnaissance of southern Transjordan’. Bulletin of the American School of Oriental Research 67, 19–26.