In May 2017, the EAMENA project launched an appeal for historical aerial photographs to aid the team in the identification of archaeological sites and possible factors threatening them. A subsequent post on the same appeal in the Royal Air Force Association magazine Air Mail led to a number of responses, including one from John Clubb, a former navigator in 683 Squadron RAF. This squadron performed a photo-survey role in the Middle East and North Africa during the early 1950s. John kindly allowed us to scan his personal photographs from his time in the squadron, which included two oblique views of St Catherine’s Monastery in the Sinai region of Egypt. These two images allow us to undertake a detailed assessment of landscape change around the site over the last half century.

St Catherine’s is an important site for Biblical scholars, and the prophet Mohammed is also said to have visited the monastery. It is situated in the Wadi ed Deir, on the eastern edge of Jebel Musa/Mount Sinai in Egypt. It is believed to be the Old Testament location where God appeared to Moses in the Burning Bush, and where Moses received the Ten Commandments. The monastery, also known as a castrum-laura because of its dual functionality as fortress and monastery, is commonly attributed to the 6th-century Emperor Justinian, making it the oldest continuously occupied monastery in the world. However, the history of monasticism in the St Catherine area can be traced back further still to the widespread arrival of anchorites in south Sinai during the 3rd century AD. Some of the monastic buildings – most notably the chapel constructed on the site of the Burning Bush – are attributed to the reign of Constantine in the 4th century AD (Mount Sinai Monastery website).

The example of St Catherine’s Monastery clearly shows how valuable historical photographs are for our understanding of the development of archaeological sites (Saint Catherine Monastery, Egypt). Until we obtained the 1951 oblique aerial imagery, our assessment of the site predominantly relied on Google Earth imagery, which is currently available for the period 2005–2016. As Figures 1 and 2 show, relatively little about the monastery had changed: some vegetation was removed or grew taller, but the buildings and outbuildings and traces of earlier structures to the south-east of the monastery remained the same. These earlier structures are likely to be the recently excavated quarters for soldiers and their families, involved in the construction and protection of the monastery during the sixth century AD (Mount Sinai Monastery website).

Baram, U. 2007. Archaeological surveys, excavations, and landscapes of the Ottoman Imperial Realm: an agenda for the archaeology of Modernity for the Middle East. In S. Gelichi and M. Librenti (eds), Constructing Post-Medieval Archaeology in Italy: a new agenda. Prceedings of the International Conference (Venice, 24th and 25th November 2006), 11–18. Borgo San Lorenzo: All’insegna del giglio.

Wilson, C.W. and Palmer, H.S. 1869. Ordnance Survey of the Peninsula of Sinai Part 1: account of the survey with illustrations. Southampton: Ordnance Survey. 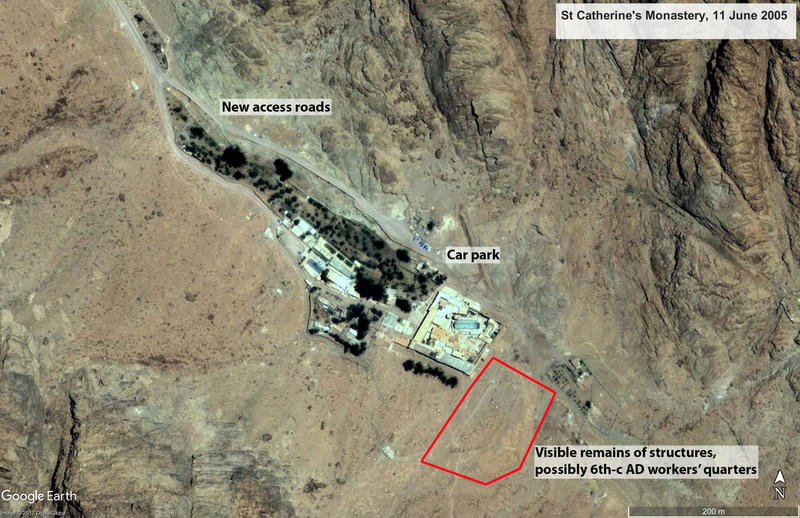 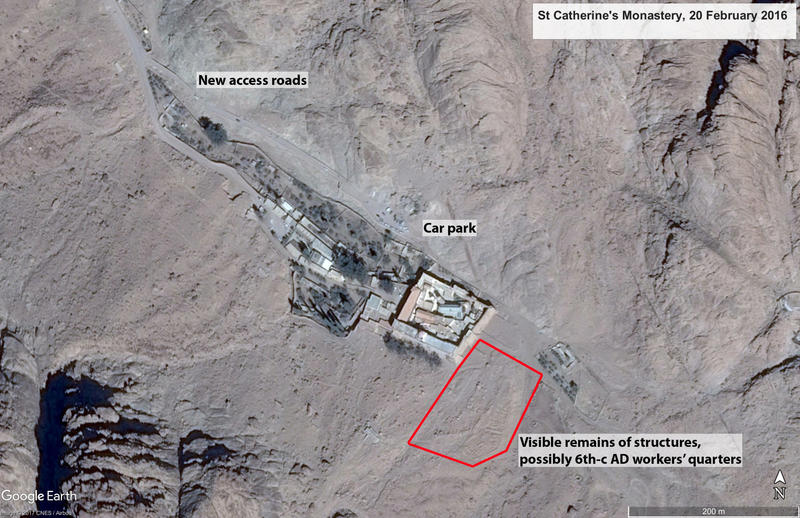 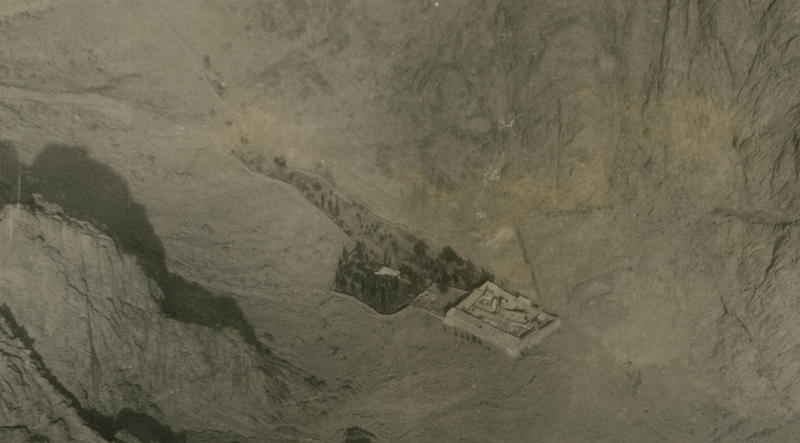 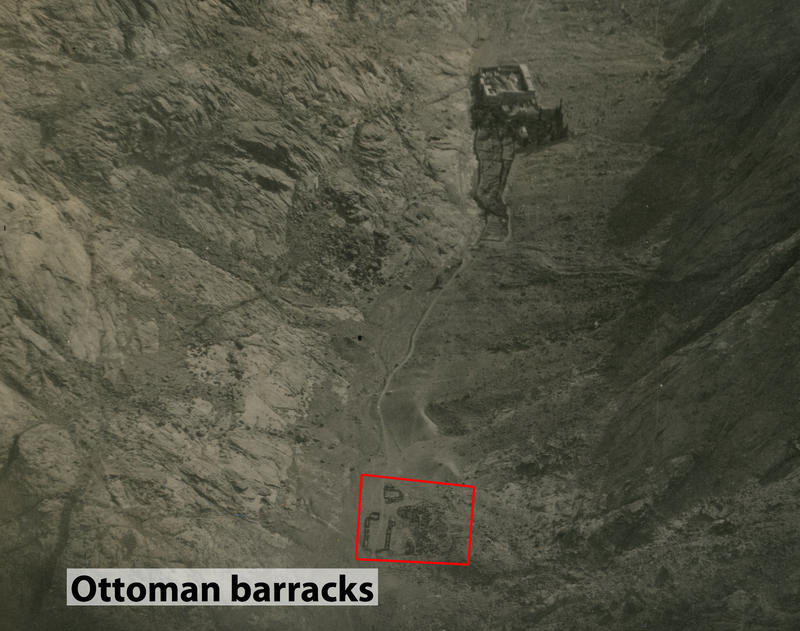 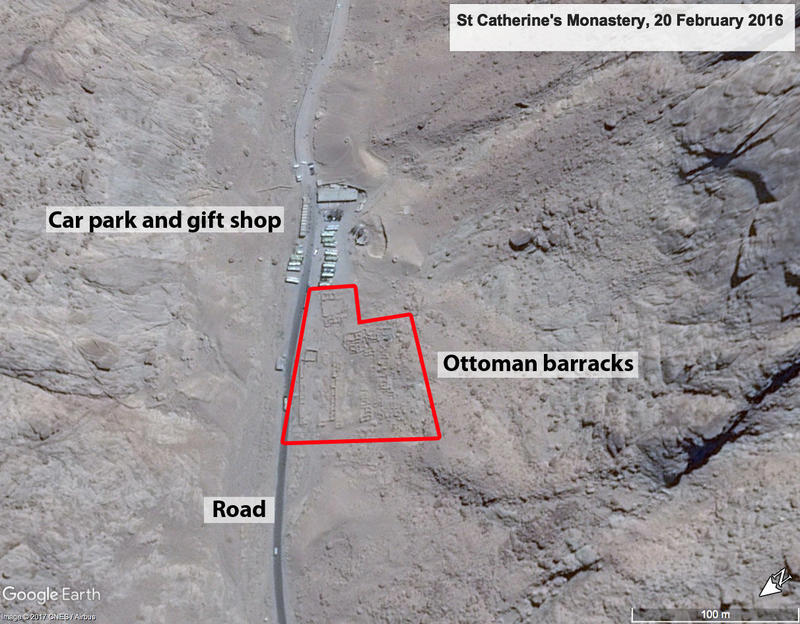 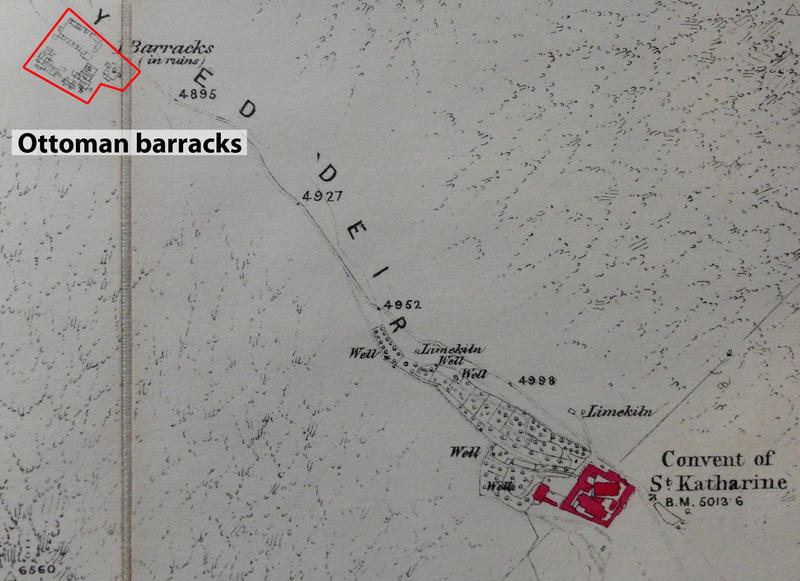