The UCL Institute of Archaeology Collections Air Survey photographs comprise a series of glass plate negatives, cellulose negatives, safety negatives, and prints of Royal Air Force (RAF) aerial photographs taken between 1918 and 1939. The photographs are predominantly of Iraq, the former Transjordan, Egypt, and Sudan (see distribution map). Recently, EAMENA put out a call for information regarding collections of aerial photography. One of the reasons for this is that the aerial photography conducted by the Royal Air Force in the Mandate territories was not comprehensively archived, and some of it was destroyed once it had served its immediate use. What has survived is fragmented, so we are trying to find and piece together those fragments because these images are an amazing resource for discovery, monitoring and analysis of archaeological sites. The UCL collection is one of the larger collections of RAF imagery from the Middle East, and its survival for use in archaeological research was no accident. 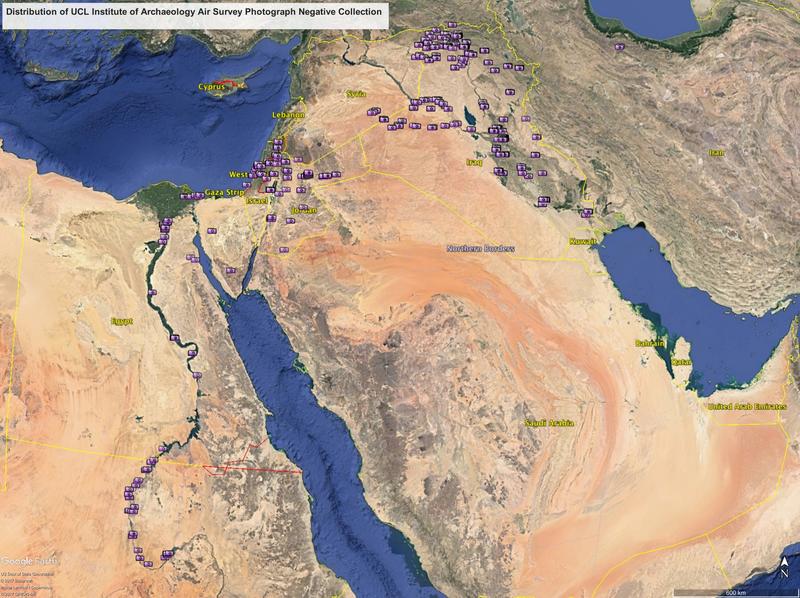 This collection originated from a deposit made by O.G.S. Crawford to The British Museum of ‘obsolete’ photographs collected from the RAF during a tour of Iraq, Transjordan, and Egypt in 1928, made at his own expense. In a presentation to the Royal Geographic Society (RGS) and published in The Geographical Journal in 1929, Crawford describes how he enlisted the help of the Air Ministry to photograph sites of archaeological interest, and stated that ‘these, and also many existing but obsolete negatives abroad, should be handed over to the Director of the British Museum, to form the nucleus of a national collection.’ The exact contents of this original deposit, however, are not entirely clear from the written record. Crawford stated to the RGS a number of 1,700 negatives; the British Museum Trustee Minutes of 8th June 1929 state 1,150 glass plate negatives and nine rolls of film. This original deposit is likely to be those items now in the UCL Collection, numbered AP1­–1356, or possibly all the way to AP1405 (note that there are no items between AP1101–1202 due to misnumbering). As stated, these are predominantly glass plate negatives (most likely gelatin dry plate). It is important to note that many of these are re-photographs of prints or mosaics, which was possibly a mechanism used by the RAF for copying developed material. The original rolls of film have been copied to safety negative film.

Crawford arranged with the Air Ministry for further photography of archaeological sites to be contributed, and the collection continued to grow from these subsequent deposits. The British Museum Trustee Minutes note at least two deposits of this nature: one in 1931 (Trustee Minutes 12th December 1931) and another in 1938 (Trustee Minutes 14th May 1938). These are predominantly 5 x 5 inch cellulose negatives, and some rolls of film (that have been copied to safety negatives). The UCL collection also includes photographs taken as part of Sir Aurel Stein’s aerial survey of Iraq with the help of the RAF in 1938 and 1939, so at least one further deposit must have been made, but whether this came from the Air Ministry or from Stein himself has not yet been confirmed. Prints of the majority of this Stein survey material are at The British Academy Archive, though there is some variation in annotation (ASA/3 – see our previous blog, and the Flickr photoset by APAAME.) This collection of aerial photographs was originally going to be transferred from the Department of Western Asiatic Antiquities at the British Museum to the Ordnance Survey, where a plan for an aerial photographic library was underway (Trustee’s Minutes 12th October 1940, 11th October 1941), but this never came to pass. Instead it was agreed that the collection should be transferred to the Library of the Institute of Archaeology (The National Archives, OS1/384, letter marked ’58A’, dated 31 May 1949) at Crawford’s suggestion (Trustee’s Minutes 9 July 1949) to continue as a collection for archaeological reference and something that would be of interest to students. It is now part of the UCL Institute of Archaeology Collections. 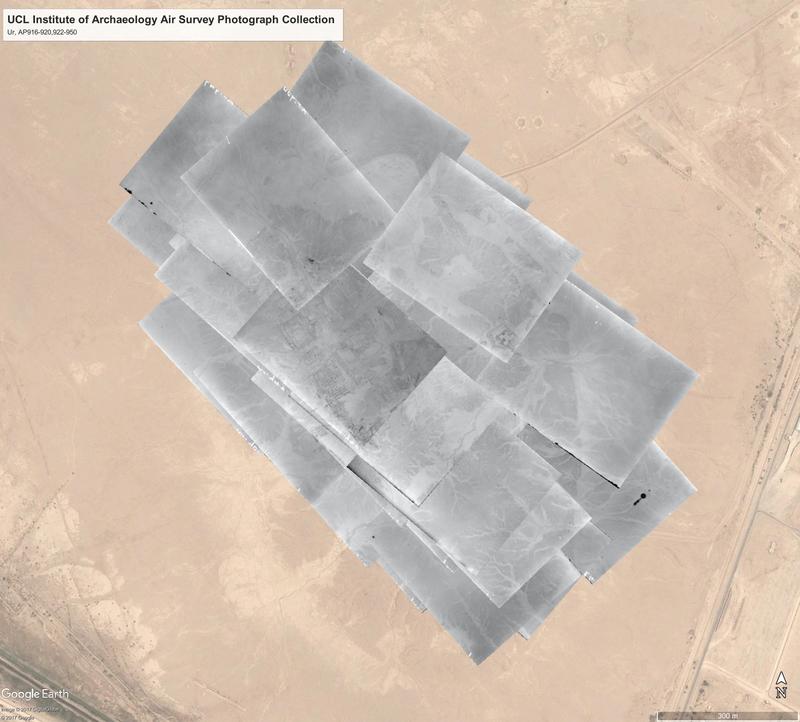 Photo-mosaics produced from the aerial photography taken by 14 Squadron are particularly common for former Transjordan, including a continuous photo mosaic over four frames of the River Jordan (AP1086–1089), and for the area of Petra and Beidha (AP1286–1289). In only a few instances are the individual frames and the photo mosaic both included in the collection, for example, for Qasr Uweinid (AP1036–1038 and AP1040). This is useful because the creation of a photo-mosaic introduced further distortions into the imagery.

The collection captures some sites in the process of excavation, such as Ur and Khorsobad, and also includes a small number of ground photographs of these two sites (AP645–665 and AP1806–1812, respectively), as well as a single ground shot of Nineveh (AP1805).

The majority of sites captured in Egypt and Sudan follow the Nile, including an extensive collection of photographs of the well-known site of Giza, as well as other pyramids further south. An exception is a small series capturing archaeological sites in the vicinity of the northern section of the Suez Canal and the Sinai Peninsula (AP1591–1614).

This collection was digitised by the APAAME project in 2016 in agreement with the UCL Institute of Archaeology, and in co-operation with the EAMENA project. Where known, images have been geo-located, and this process is on-going. Interestingly, one image, AP357, seems, due to the architectural style visible in the photo, to not be of a site located in the Middle East or North Africa region at all and remains a mystery. Geo-location is assisted by the annotations on the (deteriorating) photograph envelopes; where this type of information was available, this has been included in the image caption on the APAAME Flickr page. These annotations are particularly rich for the original deposit by Crawford, where the majority of glass plates are enclosed in RAF aerial photograph annotated envelopes (or replacement ‘Antiquity’ or ‘Ordnance Survey’ stationery), and are secured in wooden glass plate cases. 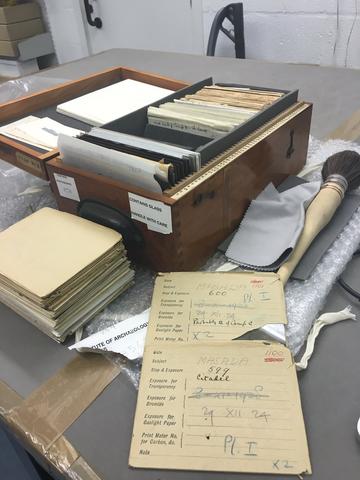 Only the negatives were digitised. Some interruptions in the sequence of photographs suggest some items are missing, while others have been broken (where possible the latter have been included in the scanning process). There are also prints in the collection, but these have not yet been fully investigated. All enquiries regarding access to the collection and reproduction of the images must be directed to the Collections Manager, Ian Carroll: i.carroll@ucl.ac.uk. We thank Ian Carroll and UCL Institute of Archaeology for their co-operation and assistance during the lengthy digitisation process. Thanks also go to Francesca Hillier (The British Museum Archive), Patricia Usick (The British Museum Egyptian Department), and Angela Grimshaw (The British Museum Middle East Department), who have assisted in our enquiries regarding the provenance of this collection.

Links: The digitised collection can be browsed on the APAAME Flickr page. Information regarding the UCL Institute of Archaeology and their Collections and Archive can be found at the following links: