Which visitor or town? The ‘Great Transfiguration’ of Sinai’s endangered cultural mountain landscape

Sinai, with its beautiful kaleidoscope of landscapes was a once tranquil area, whose natural assets are now beacons for developers to lure tourists. It is now at risk of growing into a lodestone overrun by unprecedented and unsustainable numbers of visitors.

Sinai’s transitional geography is a multifaceted complex dimension — compounded by a country pushing for gigantic new projects in a short-to medium-term period, aiming for a high return on investment. The central government of Egypt (Ministry of Planning and Economic Development), has initiated the ‘Great Transfiguration’ project which is yet another top-down ‘tourism development project’.  Such projects depend on a group of consultants and/or sub-contractors to work in collaboration with the South Sinai Governorate and the Ministry of Environment (Nature Conservation Sector), in one of Egypt’s (and the Middle East’s) outstanding cultural landscapes - at the epicentre of which is a UNESCO World Heritage Site: the vicinity of Mount Sinai and Saint Catherine's Monastery in the High Mountains Region of the peninsula. 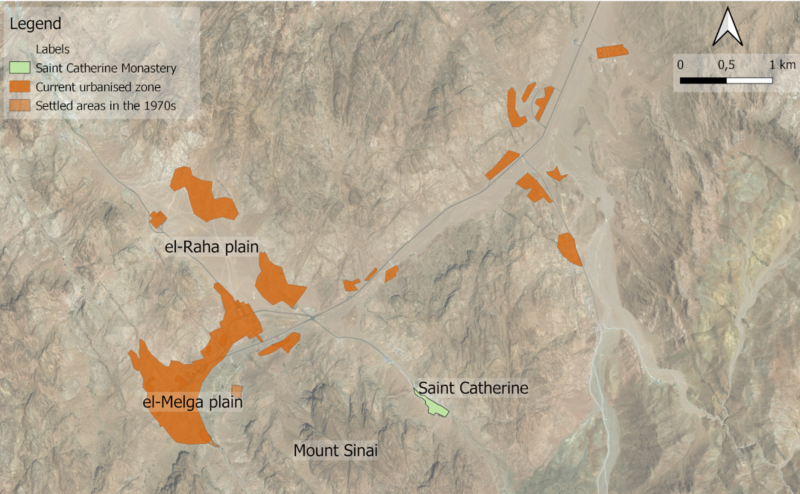 Sinai is a desert of classical cultural landscapes which have been written about, painted and photographed, and mapped. Pilgrims, travellers, scholars and more recently tourists traversed the land to the traditional location of Mount Sinai, Gebel Musa, since at least the 4th century CE. The economy of the town of Saint Catherine has relied on eco-cultural tourism since 1980s through family-based businesses, or one-day mass tourism to Mount Sinai from the resorts on the Gulf of Aqaba, operated by tourism companies and led by local Bedouin guides and cameleers from the Gebaliya tribe.

The new project, by name and messaging, is aimed at ‘The Pilgrim’ or in a contemporary sense ‘The Eco-cultural Tourist’. This short article is not talking about a marketing campaign, however, but rather, a high-density construction project which involves high concentration of buildings in the town, and extends to el-Raha plain, one of the most classical and well-documented scenic views in the peninsula. It was the pilgrim’s natural and historic gateway to the Monastery of Saint Catherine and Mount Sinai.

The above opens a controversial question about which ‘Alpine’ town the developers imagined in their design?! A leisure town for mass tourism with government or external investment to construct high concentrations of buildings including chalets (accommodation and service facilities), plus the possible re-emergence of the 1980s cable cars argument in the future, or a cluster of eco-cultural tourism facilities distributed between existing localities and suited to the declared target-visitor?

The first type of tourism development model – and unfortunately, the model pursued (in terms of context) by the current central/regional authorities or developers – has a high negative impact on the surrounding protected cultural landscape, while the second will develop a large number of localities, create direct job opportunities in-situ, reduce the environmental impact through distributing the flow of visitors without decreasing the target-numbers or return-on-investment, establish multiple entry points across the mountain range which will have a positive effect on the overall visitor experience, and protect Sinai’s endangered cultural landscape.

Such a modest impact—compared to the proposed ‘Great Transfiguration’ project—has been well-documented since the transformation of the traditional Bedouin encampment in el-Melga plain to what later became the present and only mountain (heritage) town in Egypt: the town of Saint Catherine. It was part of an urbanisation process that took place from the 1980s, not top-down urban planning, but which still exerted a considerable pressure on ground water resources and the vegetation in the town and the surrounding cultural landscape, with a relatively small population engaged in the existing tourism development model described above, compared to the current project under construction.

Despite the importance of the interest of the central government in the town, the faulty dimension in the execution of the ‘Great Transfiguration’ project is the limited consideration of the totality of the economic value of the cultural landscape. There is a substantial value in protecting Sinai’s classical scenic views associated with ‘The Pilgrim’, whereas the construction (hotels and real-estate) is only one component of landscape value (i.e., financial value), which will have an adverse impact on the town of Saint Catherine in the medium and long term.

Re-thinking ‘which - visitor or town?’ is the timely answer to the protection of Sinai’s endangered mountain cultural landscape.