When you are looking at historical satellite imagery from the 1960s and 1970s, and comparing it to modern satellite imagery on Google Earth, it feels like you are time travelling. Old satellite imagery, now increasingly available to us, provides a unique glimpse of past landscapes, and can also lead to important insights into changes that took place over the last half century.

The EAMENA project has recently purchased historical imagery from the so-called KH-7 and KH-9 satellite systems for a number of study areas including South Sinai. In this blog post, we give a brief overview of the history of these satellite systems, and then use the images to look at some major landscape changes, focusing on the area near St Catherine’s Monastery in the High Mountains Region (also see Ten Harkel et al. 2018)

Figure 1: US Air Force C-119J recovers a CORONA capsule returned from space in the 1960s. This type of aircraft was specially modified for the mid-air retrieval of space capsules re-entering the atmosphere from orbit. Source: Wikipedia

The use of declassified historical satellite imagery for the study of archaeological sites and landscapes is well-established and widely used by the EAMENA team (e.g. Fradley 2015; Banks 2016; Bradbury 2017; Kenawi 2020; Simi 2020). Most of this imagery was captured by the US Keyhole (KH) satellite systems, operational from the 1960s to the early 1980s. These satellite systems captured black and white imagery with a telescopic camera. Once completed, the exposed film was placed into recovery capsules, which were de-orbited and retrieved by specially-equipped aircraft as they parachuted down towards the earth’s surface. Their original purpose was for reconnaissance and map-making for US intelligence agencies during the Cold War era.

In the 1990s, an evaluation concluded that the first 6 of these satellite systems – KH-1 to KH-4, code named CORONA; KH-5, code named ARGON; and KH-6, code-named LANYARD – were no longer required for intelligence purposes, but were instead of historical interest and subsequently declassified in 1996 by Executive Order 12951. These imagery scenes are now available for download from the US Geological Survey (USGS) for a low fee, with many scenes made available for free after they have been purchased and scanned for the first time. This imagery is now very widely used, particularly those scenes that are georeferenced and freely accessible through the Corona Atlas. In 2002, KH-7 and coarse-resolution (20–30 ft) KH-9 mapping imagery were declassified under a continuation of the same Executive Order, followed by high-resolution (2–4 ft) KH-9 imagery in 2011. The KH-7 and high-resolution KH-9 imagery have an advantage for archaeological and heritage monitoring purposes because of their higher resolution, up to 2–4 ft as compared to CORONA’s 9 ft (KH-4A) to 6 ft (KH-4B) (KH-1–KH-3 imagery was of much coarser resolution still, varying between 25–40 ft).

Earlier this year the EAMENA project purchased historical high resolution KH-7 and KH-9 satellite imagery from the USGS for a number of different study areas, including a large part of South Sinai as part of preparations for a research article comparing the High Mountains to the coastal zone in this area (Tews et al. forthcoming). The high-resolution KH-9 imagery, dating to January 1974, provided coverage roughly from Ras Matarma in the east to the Nuweiba area on the Gulf of Aqaba, roughly 20km north of Wasit, and all the way down to the Ras Mohamed Nature Reserve on the southern tip of the Sinai Peninsula (Fig. 1). 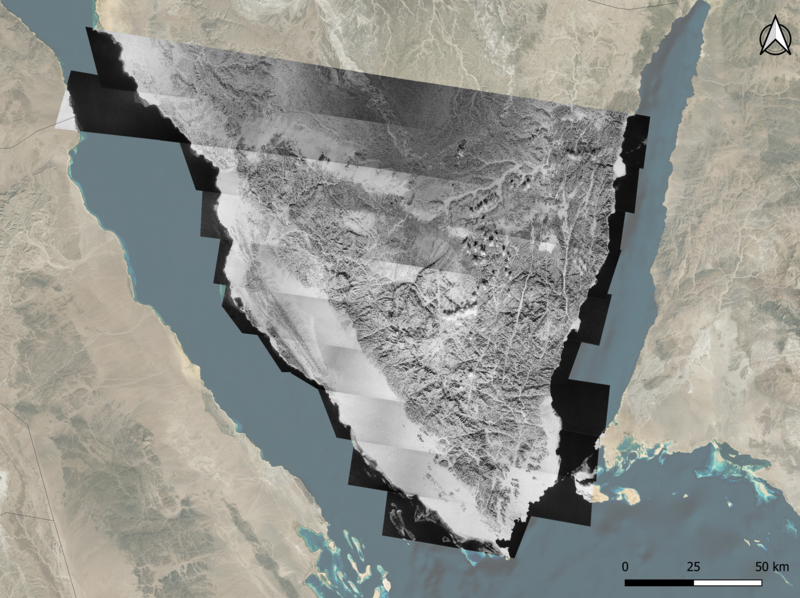 Georectification of KH-9 imagery for the South Sinai was carried out manually in QGIS 3.16.4 using Google Earth satellite imagery1as the base map for control points, aiming for an error of <50m. Heritage records for the area, previously recorded as part of the SinaiArchaeoWater (SAW) project, were exported as a shapefile and included in the same GIS allowing for comparison between the historic landscape of 1974 and the contemporary landscape. The availability of the KH-9 imagery was particularly valuable for the Sinai region because the date range of available Google Earth imagery, which had informed the analysis of the SAW project, is relatively limited: for some parts of the High Mountains area, only imagery between 2013 and 2018 was available [last checked on 22 July 2021]. Earlier CORONA imagery for the area was available, but the resolution was not good enough to identify the majority of archaeological sites. The KH-9 imagery therefore considerably expanded the chronological time-depth, allowing for a more in-depth assessment of recent changes in the landscape.

The area near St Catherine’s Monastery has been subject to extensive change in recent decades. Declared a Natural Protectorate in 1988 and a World Heritage Area (WH List 954) in 2002, the area’s religious importance and natural beauty form a major attraction for international tourism. In the 1980s, the access road to the monastery was tarmacked, leading to an ever-growing increase in visitor numbers. As a result, the town of St Catherine developed in El Melga plain and expanded exponentially in just a few decades, as a comparison between the KH-9 and Google Earth imagery clearly shows (Figs 2–3).

The inclusion of the area in a Natural Protectorate and a WH Area mean that it enjoys some protection, but – as highlighted previously (Shams and Ten Harkel 2019 ) – this mainly applies to officially recognised and registered sites. The tangible heritage of the local Bedouin population, on the other hand, is under threat. This includes sites such as orchards, water dams and traditional houses, many of which are still in use today but may date back to earlier centuries. This heritage was mapped by Sinai Peninsula Research (SPR) and – with additional information collected through a Google Earth remote sensing survey – included in the EAMENA database as part of the SAW project (also see Warren 2021). With the help of the KH-9 imagery, it has now also been possible to identify additional sites that are no longer visible on the Google Earth imagery, and are likely destroyed (Fig. 4). The fact that these all cluster in El Melga plain around the town of St Catherine serves as a timely reminder of the potentially damaging effect of infrastructure developments to accommodate mass tourism, at a time when far-reaching new development proposals for the area are being implemented. These changes will be discussed in more detail in a forthcoming blog post, so watch this space! 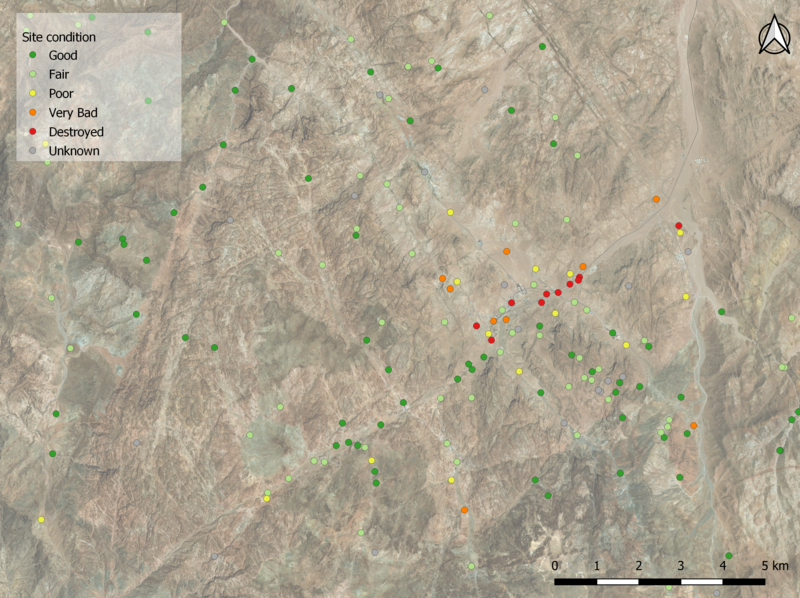 A special thank you must go to Michael Fradley for identifying and purchasing the KH-7 and KH-9 imagery on behalf of the EAMENA project, and for his helpful comments on an earlier draft.