Visiting sites on the ground in Jordan. Part 2: the Madaba region

Road building is one of the disturbances frequently recorded by the EAMENA team. When an extension the Madaba ring road in Jordan was planned, Dr Andrea Zerbini and Rebecca Banks worked together with the Jordanian Department of Antiquities to assess the impact that this development would have on archaeological sites in the area (Banks and Zerbini 2015). They identified 141 potential heritage resources, 11 of which were under immediate threat from the ring road construction, whilst many other sites in the area were under threat from other factors such as house construction or looting. A summary of their work and the full report can be viewed here. 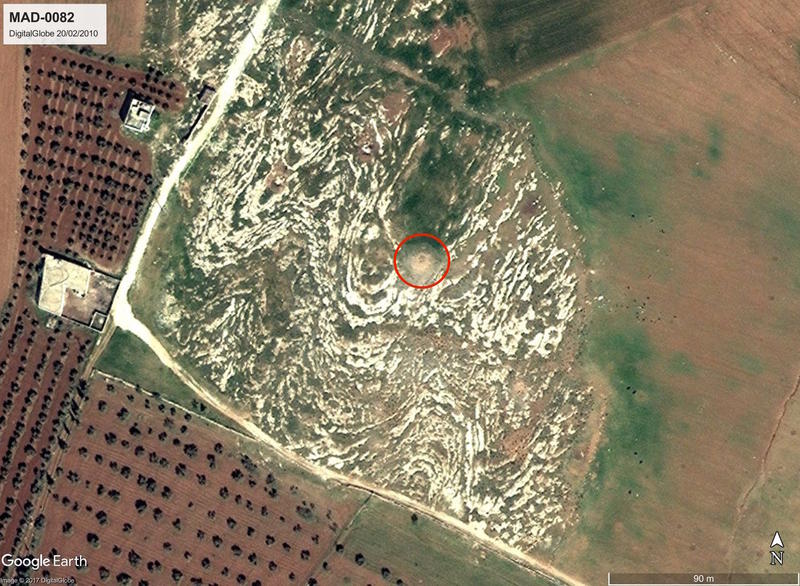 Figure 1: Satellite imagery of the cairn of site MAD-0082. From the imagery alone it was uncertain if the site had archaeological significance, but the ground visit confirmed the feature to be a (heavily disturbed) cairn. Pot sherds suggests that it may well be ancient. Imagery: DigitalGlobe via Google Earth, 20/02/2010.

For the assessment, a wide variety of sources were consulted, ranging from remote sensing material like historical and recent aerial photographs (see APAAME project) and satellite imagery to existing databases, maps, and publications (Banks and Zerbini 2015). Ground visits were not included, but in May I got the chance to visit the region for a day. I went to eight of the sites identified by Banks and Zerbini, chosen on the basis of their recommendation. I was kindly accompanied by Dr Mohammad Najjar, who, although there in an unofficial capacity, had valuable insights based on years of experience in Jordanian archaeology. 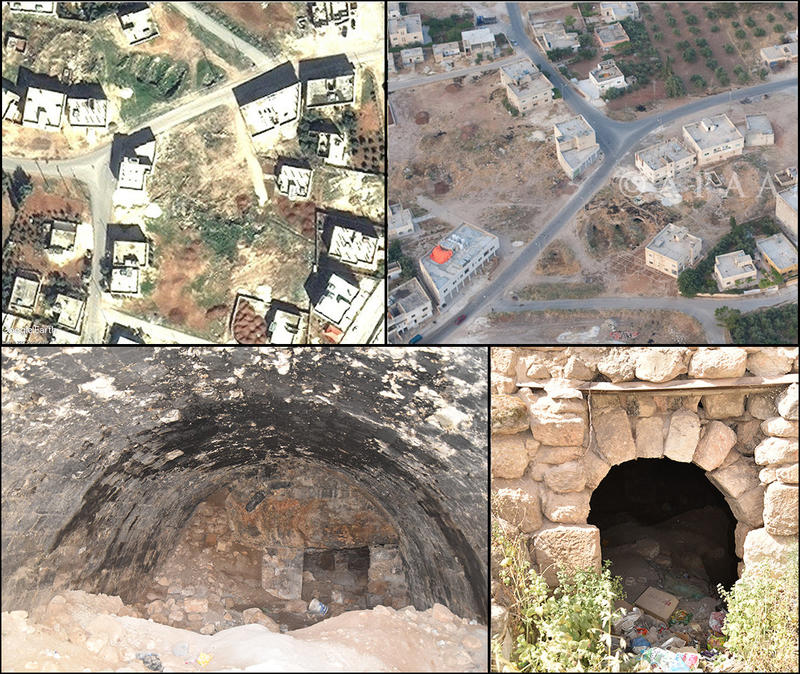 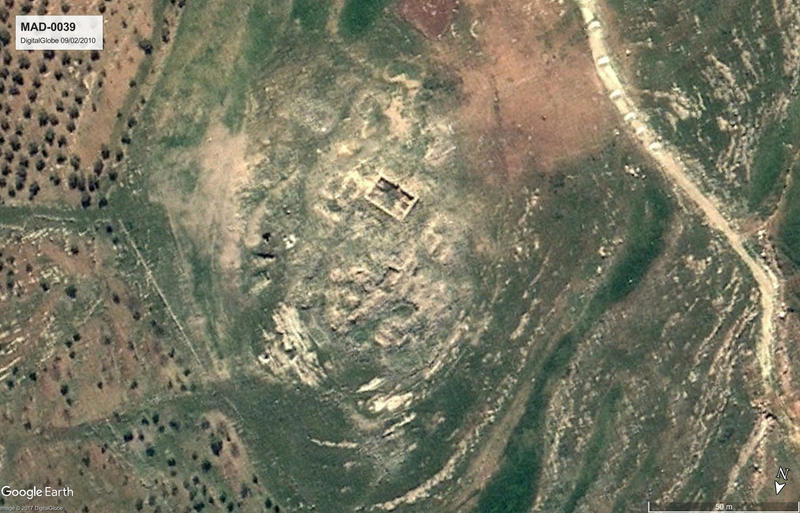 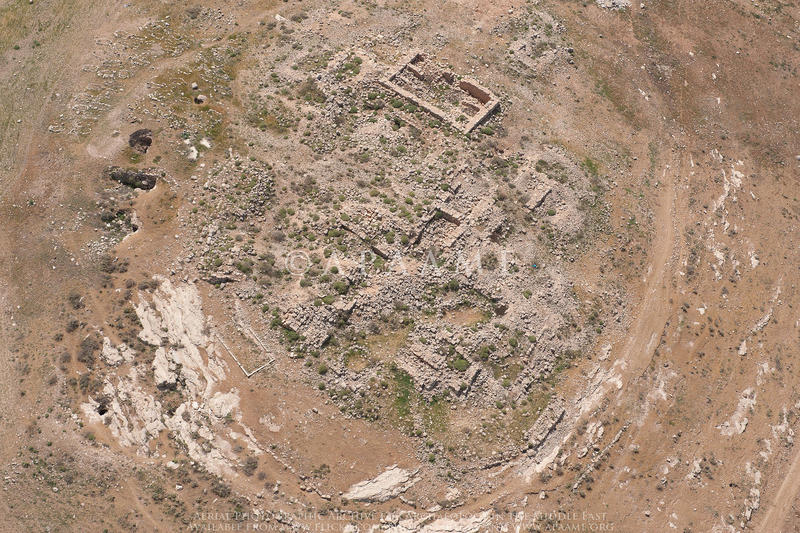 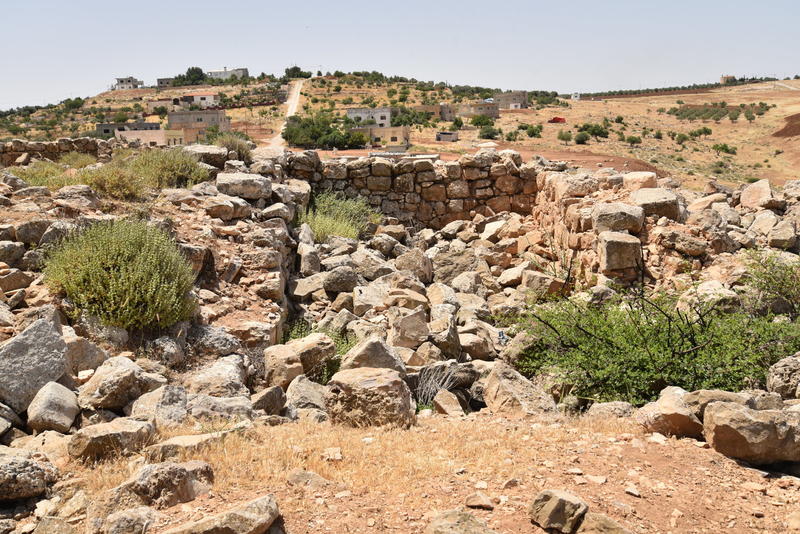 Figure 3: Khirbet Yusra (MAD-0039). Top: Satellite image from 2010 (Google Earth, DigitalGlobe 09/02/2010). Middle: Aerial photograph from 2013 (APAAME, APAAME_20130414_DLK-0211). Bottom: Ground photo taken in 2017 (P. Flohr/EAMENA). The plan of the village is clearer from satellite and aerial photos, but building techniques and materials and smaller features are clearer on the ground, where for example rock-cut tombs were observed (not shown).

Even though the remote sensing assessments we had made were correct, ground visits are still worthwhile to gain additional information not visible from the air. On the ground it is possible to distinguish smaller features, as well as things like building materials and construction techniques (Figures 2–4). It is also easier to get an idea of the period of occupation of the site, for example by looking at pottery sherds or architectural styles (Figure 4). 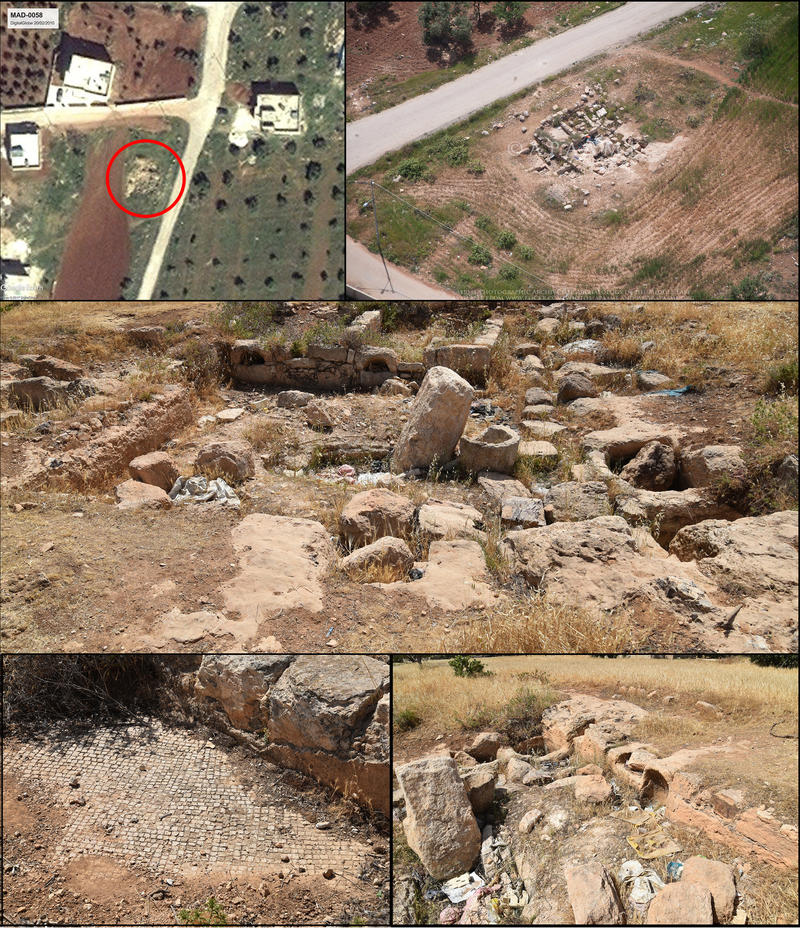 Figure 4: Kefeir Abu Sarbut press installation (MAD-0058). Top left: Satellite image from 2010 (DigitalGlobe 20/02/2010, via Google Earth). Top right: Aerial photograph from 2013 (APAAME, APAAME_20130414_MND-0315). Middle and below: ground photos (P. Flohr/EAMENA) clearly confirming the interpretation of press installation, and in addition giving clues on dating (through surface pottery and size of the tesserae visible in the lower left photo). The site appears to have subject to archaeological excavation as well as looting, and is currently disturbed by erosion, rubbish dumping, some vegetation, and by the proximity of ploughing.

The visits were also useful to get an up-to-date status of the disturbances affecting the sites and the potential threats faced (Figure 6–7). In addition, disturbances that are not clear from the imagery could be recorded, such as (smaller-scale) looting and the dumping of rubbish, the latter especially prevalent in many of the cisterns (Figures 2, 4, 6, 8). 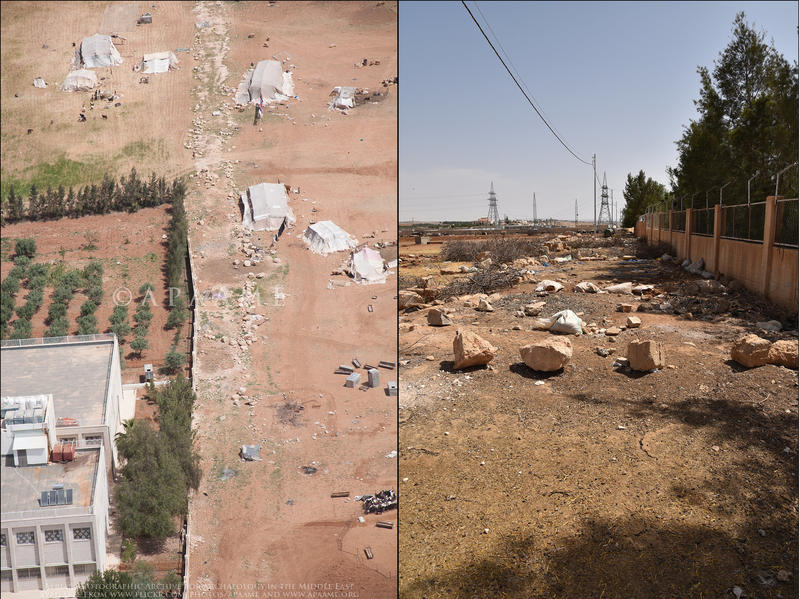 Figure 5: MAD-0033 ancient road. Left: aerial photograph from 2013 (APAAME, APAAME_20130414_MND-0467). Right: Ground photo in May 2017. While the existence of an (ancient) road was clear in the 2013 aerial photograph, in 2017 only a hard surface remains. Instead, modern building material remains were present. Whatever might be left under the surface is under threat of the tarmac road coming near, although as can be seen in the photo attempts have been made to block traffic from using the current track.

The new findings and photographs will be added to the EAMENA database. 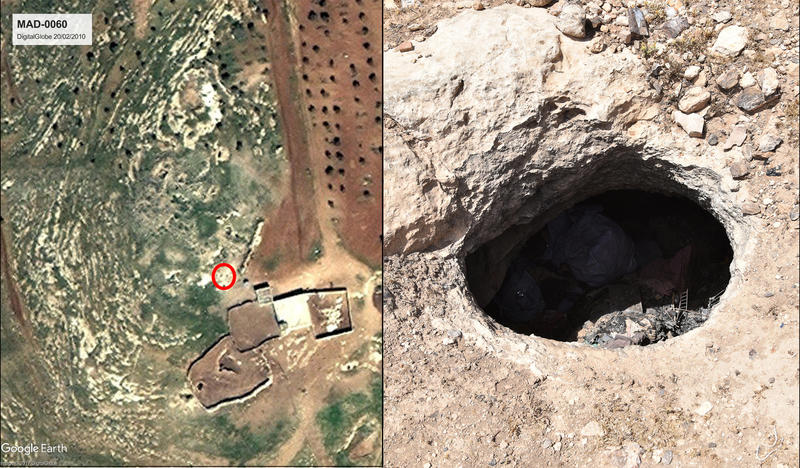 Figure 6: MAD-0060. The existence of an ancient village, as suspected from satellite imagery (left image) and historical sources could be confirmed. Structures, walls, and cisterns (right image) were present, as well as a pottery scatter indicating the site was used during multiple periods. Disturbances such as looting had been seen from the imagery, but on the ground it was further clear that rubbish dumping was present as well (right image). Left image: DigitalGlobe 20/02/2010 via Google Earth. Right image: Ground photo taken in May 2017, P. Flohr/EAMENA.

It can be concluded that site visits are an important addition to our remote sensing work. Because they are time consuming, it will never be possible to visit all sites that we identify using remote sensing, but by visiting a selection we can validate and refine our methodology and add additional information to our database. In future, more site visits would be very useful, including by regionally based heritage specialists and site wardens. 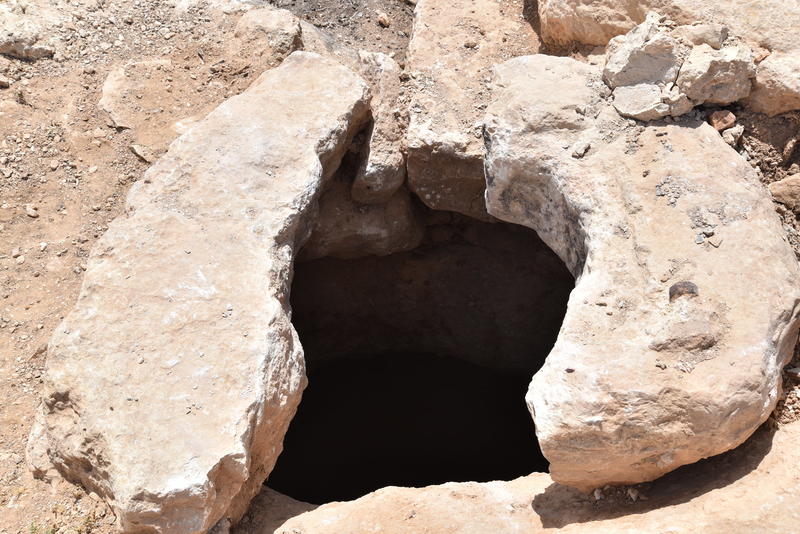 Banks, R. & A. Zerbini, 2015. The Madaba Ring Road, Jordan. Evidence of cultural assets from remote imagery in the Madaba hinterland. EAMENA report. The main report and appendices and bibliography are available for download as PDFs. 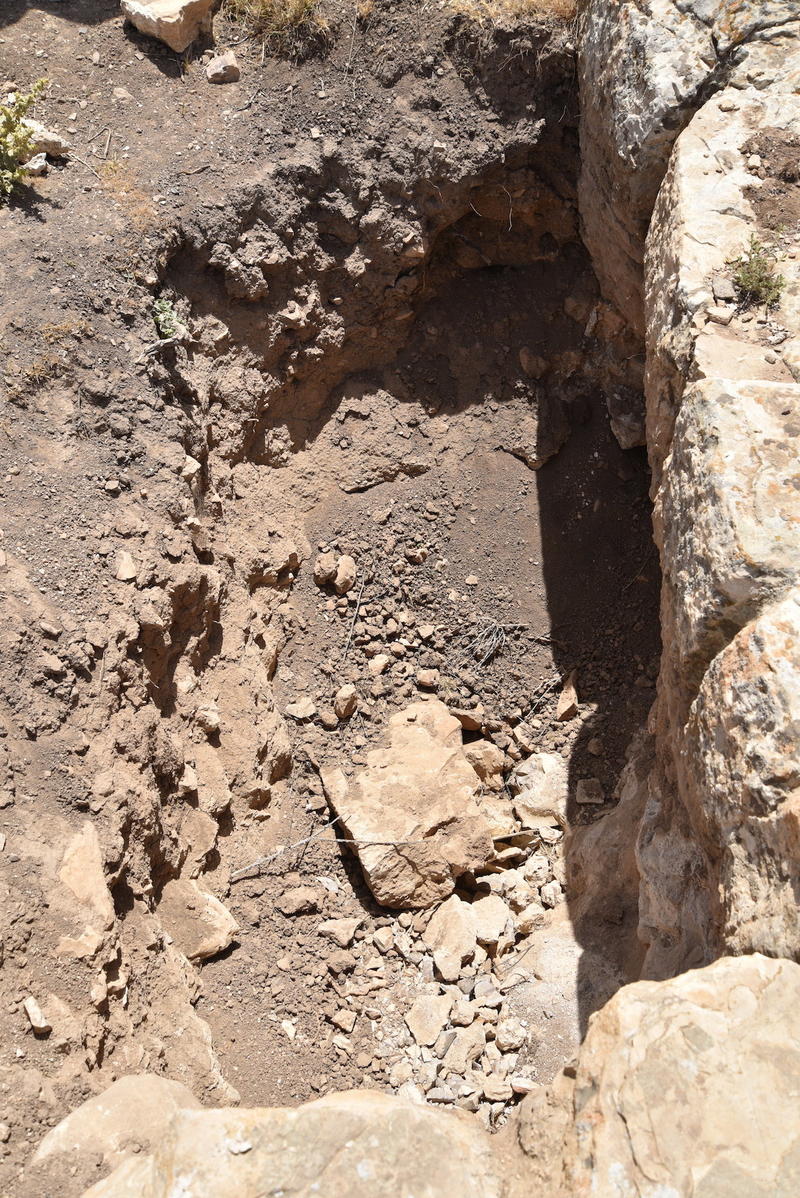